The wife and I are bringing two of our Dallas-area grandsons to Fayetteville this weekend to get a tour of the Arkansas campus. They both will be high school seniors this year (they’re twins), and one is particularly interested in attending the U of A (his twin brother is Texas Tech all the way). We won’t have a lot of free time, but I would like to hear recommendations from some of you on high points in the Northwest Arkansas area to hit, good restaurants, points of interest, etc… I don’t get up that way much any more and I know it has changed a lot in the last few years. Thanks in advance.

You’ll have lots of recommendations in this thread, but here’s a couple of ideas. Wright’s BBQ in Johnson is better than most other BBQs anywhere; don’t miss it. Catfish Hole is another spot you can’t miss.

The other idea: make a loop drive from Fayetteville up to Bentonville, then back down on US 71 to see the overall growth of the area. Without that trip you might be led to believe there are hillbillies in NWA. This is a major growth area, and the loop will open eyes.

Honestly, this will depend a lot on their interests. I could give a ton of recommendations having gone to school here and living in NWA for the past nearly 25 years.

I agree that you’ll want to show them the cities of Benton County as well, but I’d decline the trip back on HWY 71. A lot of that is now either outdated or industrial use.

If they like the arts, Crystal Bridges (and surrounding grounds) and The Momentary in Bentonville would be good spots. And the growth of downtown Bentonville with housing and restaurants gives an added experience.

If they like nature, Beaver Lake is only about 10 minutes from downtown Rogers. Don’t go to Beaver around Springdale, it’s more of a river there and not nearly as pretty.

If they like biking, show them any of the trails from Fayetteville to Bentonville, along with the Coler Mountain Bike Preserve or trails just north of Crystal Bridges, and The Railyard bike park near downtown Rogers.

If they like golf, show them The Blessings in Johnson and Pinnacle in Rogers, along with TopGolf. There are a number of good muni courses in Bella Vista as well.

My nephew visited in the spring, and his favorites were Hugo’s and Slim Chickens. There is a very wide variety of eating options from Fayetteville up to Rogers/Bentonville that I’d be happy to share, but my tastes are different now than when I was in school so I won’t just throw out a big list because it may be different than their likes. Wright’s BBQ is fantastic.

My favorite place to eat is Oven and Tap in Bentonville. The steaks, pizza and just about everything is really good.

Herman’s is my favorite place for supper in Fayetteville. Good steaks, great hamburger steak and shrimp. The Wallace salad is awesome.

Go to the Rolling Pin in Fayetteville for breakfast. Grits, ham, eggs, and biscuits, plus John Wayne omelets.

Hugo’s is a must for them. Dickson St. is another, especially around 8-9 PM when it starts getting lively.

My food recs would be Wright’s Barbecue in Johnson and Local Lime in Rogers.

Downtown Bentonville is cool with some Wal Mart/Sam Walton relics.

Downtown Bentonville is cool with some Wal Mart/Sam Walton relics.

Our favorite for burgers and fries is Hugo, just off the square…For full menu…try Bordinos on Dickson Street….Ribs….try Herman’s on Highway 71, check and see if there are any activities going on campus or in Fayetteville or other cities near by…… 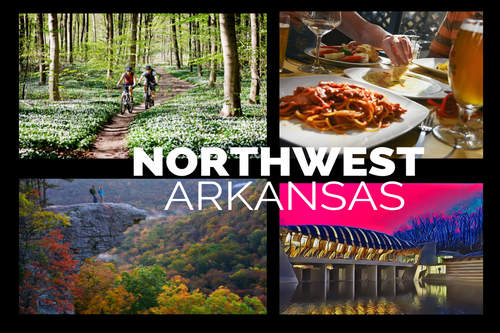 Man, were you ever right. The boys could not have been less interested in the Bentonville Square. Oh, well.

So what else did you do?

Catfish Hole Thursday night, Rick’s Iron Skillet for breakfast Friday morning, Herman’s for dinner Friday evening. Drove up 49 to see downtown Bentonville Friday morning. Had a nice campus walking tour Friday afternoon, followed by a driving tour of the downtown Fayetteville area. Everything was as nice as expected, although we were a little disappointed with Herman’s. Catfish Hole made up for it, though; the food there was amazing. Also, we stayed at the Razorback-themed Graduate Hotel in downtown; that has to be the coolest hotel ever if you’re a die-hard Razorback fan like me. All in all, it was a memorable trip and the boys came away impressed with the school and the area. Where they will finally wind up going to college is anyone’s guess at this point, however. I still think Texas Tech is the leader in the clubhouse due to prior family ties.

Great summary. NWAr is a wonderful piece of Earth.

If I could provide unsolicited advice, send them where is most affordable for undergrad and to the best possible school for grad school, if applicable.

Be sure to cross-examine faculty and research job prospects for any potential majors. College is an investment and we should all treat it as such.

Also, selfishly, consider where you might like the kids to live. Families tend to locate with the wive’s families.