This comes up from time to time: What are your favorite books?

I always start with A River Runs Through It, by Norman Maclean. My wife knows that and she stumbled upon (in one of my Fly Fishing magazines while looking for photos to copy in her water colors) a review of a new book, by John Maclean, Norman’s son. She bought it for me for Christmas. I read it in two days. It was wonderful.

Home Waters, the new book, is a historical account of the history of the Bitterroot area, including a complete history of the Maclean family. John wrote for several Chicago newspapers and eventually was in the Tribune’s Washington DC bureau. He is a solid writer as his profession would suggest.

If you have read A River, then you should read Home Waters. And, if you have read neither, I pity you. (Just kidding.) I marvel at the way Norman Maclean wrote. He only wrote three stories, actually novella type stories. When you order A River, you will actually get three stories together. All are western stories so to speak. The criticism from book publishers who declined to accept it said they have “trees in them.” The Maclean’s background includes work with the Forrest Service and logging, so that stuff is woven through both books.

I learned a lot from both books and they are highly interesting. The writing in Home Waters is good, but the writing in A River is classic. I don’t care if you love fly fishing as I do or don’t, this is wonderful stuff. There is so much about Montana that does not include fly fishing and I love Montana, too.

Norman Maclean did not write a book until he was over 70. That inspires me to continue to work. I think, “Maybe I too will hit my stride.”

I do not want to write books, but I might some day. The fact that John Maclean wrote about his father suggests I could do that, although there are no plans for that. He has given me the blueprint on how to do it. I would not do it as a way to add income. Book writing typically adds to your debts. You get no income while doing it and you don’t after you finish. LOL.

I was disappointed not to find my original copy of A River when Home Waters arrived. From time to time I loan it out and ask that it be returned. I guess it didn’t make it back one time. I read it again every time it comes back. And I haven’t in some time, so I don’t know what happened to it. If you have it, don’t worry now. I replaced it.

I ordered the 45th anniversary of A River while traveling to Tampa and it includes a foreward from Robert Redford on how he talked Norman into letting him do the movie. It’s a reminder that Norman had passed by the time the movie came out. Redford did explain that others had tried to get the movie rights before him, including one actor who came to Norman’s cabin on a lake to fish and didn’t bother to buy a fishing license. He got thrown out. I like Norman even more after reading that.

I would read any book you wrote, Clay.

I got started on the Outlander series a few years ago and I’m reading the latest, Go Tell The Bees That I Am Gone now. I have another book I want to read soon called Wind River. It is about the struggles of Native Americans in Oklahoma. I read a lot of history and fiction, particularly those that lean to the western areas of the country. Cormac McCarthy is a favorite author of mine.

Cormac McCarthy is a favorite author of mine

Mine too. And since I’m kinda weird, I like Thomas Pynchon as well.

Looking for a new READ, will consider RIVER. Although last book recommended in this forum I absolutely hated. Just finished for the 3rd time(spaced out over 2 decades at least) my ALL TIME FAVORITE, Lonesome Dove. Enjoyed it even more.

My favorite book that I’ve read in the past couple of years is “The Man Who Caught the Storm.” It is a biography of Tim Samaras, a renowned weather scientist who died chasing the EF-5 tornado in El Reno in 2013. What really makes the book is the author’s ability to write about the science of severe thunderstorms, a lot of which is understood because of Samaras’ research. 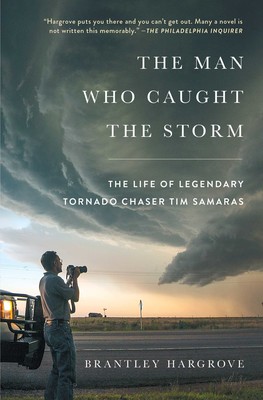 The Man Who Caught the Storm

The saga of the greatest tornado chaser who ever lived: a tale of obsession and daring and an extraordinary account of humanity’s high-stakes race ...

A great read is No Surrender written by Chris Edmonds. It’s a story about Chris’s dad Roddie Edmonds who was a POW in Germany during WWII. As the on of a WWII Army vet who saw things we cannot imagine, this book was hard to put down. Growing up Chris knew his dad was a POW in the war but never knew his heroism that saved many, many lives in the POW camp including a huge group of Jewish soldiers. If you like history of WWII, read this book. We visited Yad Vashem (Israel Holocaust Museum) a couple of years ago and their was a special section about Roddie Edmonds who had saved the lives of many Jewish soldiers in the POW camp. Chris Edmonds is a pastor at a Baptist Church in Maryville TN and never knew the details of his dad’s bravery and service until after his dad passed. Like most in the Greatest Generation his dad never talked about the war. Just like my dad. Great book.

The best books I have read are “John Adams” and its companion book “1776”, both written by David McCullough. They are history books told like a story and are incredible. John Adams won a Pulitzer Prize. Both books should be required reading for high school students. The knowledge and appreciation for the history of our country would be great for the young mind.

Pulitzer mention sparked my recollection of a chapter in Home Waters. A River Runs Through It was nominated for a Pulitzer and probably should have won it. The committee didn’t think any of the books deserved it that year and didn’t give a Pulitzer. A member of the committee knew Norman Maclean. They both were on the faculty at Chicago University. That may have worked against him because (as he told later) he failed to actively speak up on the book’s behalf. That was probably the guy who usually was the push that determined the winner in that category. So without his recommendation, they just didn’t give an award that year. Sad.

Great topic! Your words on Mr Maclean ring true Clay; I feel the same way about Robert Ruark (The Old Man and The Boy), Guy de la Valdene (For a Handful of Feathers). I’ve enjoyed everything I’ve read by them. LDHog will appreciate this - another favorite is Lanterns on the Levee by William Alexander Percy. Mr Percy lived on the MS side of the river. This book centers on the 1927 flood and life back then. Any of us a certain age from the region grew up hearing our grandparents and maybe parents talk about that. It was just "the flood’.

Lots of others I’d love to list - Shelby Foote, Jeff Shaara, and more recently Richard Grant (Deepest South of All), and pretty much anything by Wendell Berry (though I still struggle with poetry)

Anything with John Grisham’s name on it

I’m currently reading The Pioneers by McCullough. He is a great writer. I’ve read Truman, Brave Companions, The Wright Brothers, 1776, John Adams, The Great Bridge, Johnstown Flood, The Path Between the Seas, and Mornings on Horseback. I’ve probably left out some. I have most on my Kindle, although there were a few that I read before I got a Kindle.

I’ve read Louis Lamour since a child. As an adult I picked up WEB Griffin’s books. Simply love them. All of them.

I’m going to pick up A River Runs Through It and The Man Who Caught the Storm. I was living in NW OKC when that storm rolled through and bugged out. It was bad.

You know what I like about threads like this? We find commonality with people on the board outside of football. Now I know Pavlov is a McCarthy fan. I know Acrux likes Jeff Shaara, as do I. Colorado (Jim) and I have very similar reading tastes.

We all may go at hard when it comes to football topics but these kinds of topics are good.

I watched a documentary with the same title about a year ago. I wonder if it was an adaptation of the book?

I was living in NW OKC when that storm rolled through and bugged out. It was bad.

The El Reno tornado happened 11 days after the most recent EF-5 tornado in Moore. Two of the strongest tornadoes on record were in the same metro area less than two weeks apart — amazing.

I was at work in downtown OKC when the Moore tornado went through. It was a rough time.

Another book I read somewhat recently that would interest many here was “Please Delete,” which is about the financial mismanagement in the UA’s advancement office. It was written by John Diamond, who was one of the university’s top public relations officers at the time.

It is brief, but there is a reference to the Bobby Petrino firing in the book, and Diamond’s role in crafting the university’s response. 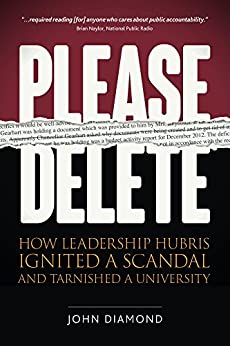 Please Delete: How Leadership Hubris Ignited a Scandal and Tarnished a University - Kindle edition by Diamond, John. Download it once and read it on your Kindle device, PC, phones or tablets. Use features like bookmarks, note taking and highlighting...

Among other things, I enjoy mystery series. I am currently on my second time through Louise Penny’s series featuring Armand Gamache. The first is “Still Life.” They are set in the fictional village of Three Pines in Quebec, near the Vermont border.