OT: on the mend

Sorry for disappearing for three days. I’m on the mend. Better today but still sore.

Had a tough Tuesday. After losing a crown on a top back molar Sunday while eating a Snickers, things deteriorated.

It was decided the extraction was the right plan but it was risky because the roots were close to my sinus membrane. Normally he’d send me to a surgeon in Rogers (we know) and he’d do the extraction. But he was full and about to leave town for spring break. I couldn’t be without protection on that uncovered molar (too sensitive without the crown).

The dentist numbed me and started in on the extraction. It broke twice and he had to stop. The roots were not budging as he feared.

So he called the surgeon in Rogers that does these type deals daily. He’d take me that day as an emergency. I’d have to get to Rogers by 2:15. It was 10:40 a.m. I had to drive home, pickup Jean Ann and hurry to Rogers from Norfork. Long story short, we made it at 2:14.58. They immediately did another CT scan and got me an IV with some really good meds. I was grateful because the numbing had worn out about 20 minutes from Rogers.

The surgeon showed me the root near the sinus membrane and said I was lucky the roots snapped when they did because an extraction (by normal pulling) might have damaged that membrane and that’s a mess.

The surgeon had my roots out in 30 minutes and I was back on the road home by 3:20. That wasn’t the end of the problem. I had no pain killer until I got home. Son-in-law picked that up at the Mountain Home Walmart and left it at my house. But the pain killer wore off about the time we crossed the White River (30 minutes from home). So I had another 90 minutes before I was comfortable. Finally got some good relief about 8 p.m. I hate those sort of meds, but there is a time and place for them.

All has gone well the last two days. I’ve used the meds given to me and I think I’m healing. The surgeon packed my incision with some super charged blood (taken during the surgery) to help the healing and protect that sinus membrane. There is probably some fancy words for that procedure, but it’s relatively new. I’m stitched up good.

I feel much better today but still not out of the woods. I can’t lift anything or bend over at the waist much. I guess that puts pressure on that sinus membrane that surgeon worries about. He explained some of the things that could have happened, but I don’t recall because he’d already begun the IV with the good stuff running through my veins. I don’t know what that stuff was, but I could get addicted to it. Jean Ann heard the detail and she said later I’d rather not hear about it (but that we avoided those issues).

My thanks to both docs. John Sullivant in Mountain Home did the best he could with what happened to me and David Baker in Rogers was great to see me in an emergency.

I’m off the heavy narcotics, but Tylenol and Aleve are still my friends. Jean Ann has been a trooper as a care giver and my driver. I am tired of jello, mashed taters and scrambled eggs and the rest of my soft food diet. Got another couple of days of that, but I’m doing what they told me to do.

Here is the sad part of this; there has been no low water to trout fish for the last month and the last two days have been zero generation on the Norfork. No way you can wade fish while taking heavy narcotics for pain. And I’m not supposed to bend over and that means putting on and taking off wading boots is not really smart.

As my dentist told me Tuesday morning when he finally decided the simple extraction wasn’t going to work, life isn’t always fair. I am going to be fine and that’s enough for right now.

Probably will stay off the forums today. Still on really strong antibiotics that seem to mess up my system, but I know they are needed with my mouth healing.

I think we’ve decided just to go without that tooth. Any other tooth in the mouth, I’d get an implant. The tooth next to it may end up being an implant.

I think we’ve decided just to go without that tooth. Any other tooth in the mouth, I’d get an implant. The tooth next to it may end up being an implant.

Copy that. SAME exact thing for me. You could have just written that story but for Mike and Brenda.

Don’t say much about Brenda but we have been together for almost 20 years. A life saving Nurse at that. With me, my mom and dad and even neighbors. She is gold

Wow I can’t stand to have my teeth cleaned much less go through all of that drama!! I hate you had to go through all that my friend, hope I never had to do it myself. Glad you’re on the mend, will be praying for a quick recovery

I’ve eaten a few oatmeal creme pies in the last three days. Still got a few left in the big box Jean Ann got for me.

Old people lose teeth. Billy, you are young. I’m not old old. But I feel older this week.

Well I’m 62 so I’m no spring chicken LOL but yeah I was actually scheduled for a crown a couple of months ago but upon further review they decided that it really wasn’t necessary after all. I’ve had a couple of root canals but luckily have not been through any traumatic experiences so far.

Nope. I have not fished of late. The Norfork has been low yesterday and today. Perfect for wade fishing. But I can’t do that right now. Need rest and I am not supposed to bend over (so I don’t know how I’d get my wading boots on).

That 25-pound brown trout was caught last week. That guide fishes live bait. It was caught with a minnow. I don’t fish that way. It’s fair to do that. There are regulations preventing that in certain zones, but I wouldn’t anywhere. I just don’t consider it sport. Yeah, I’m one of those. What they did is legal. I just don’t do it.

I guess that would qualify as a day to remember or maybe forget.
Get yourself well Clay we ain’t going anywhere.

My goodness, Clay. Take care of yourself and get back to good health.

That is not a fun experience . Thanks for update as you were missed. Not sure you saw it but there was a massive trout caught last week in Arkansas. Is on the cover of this weeks Arkansas Game and Fish report. Fish was a real beauty and was released. 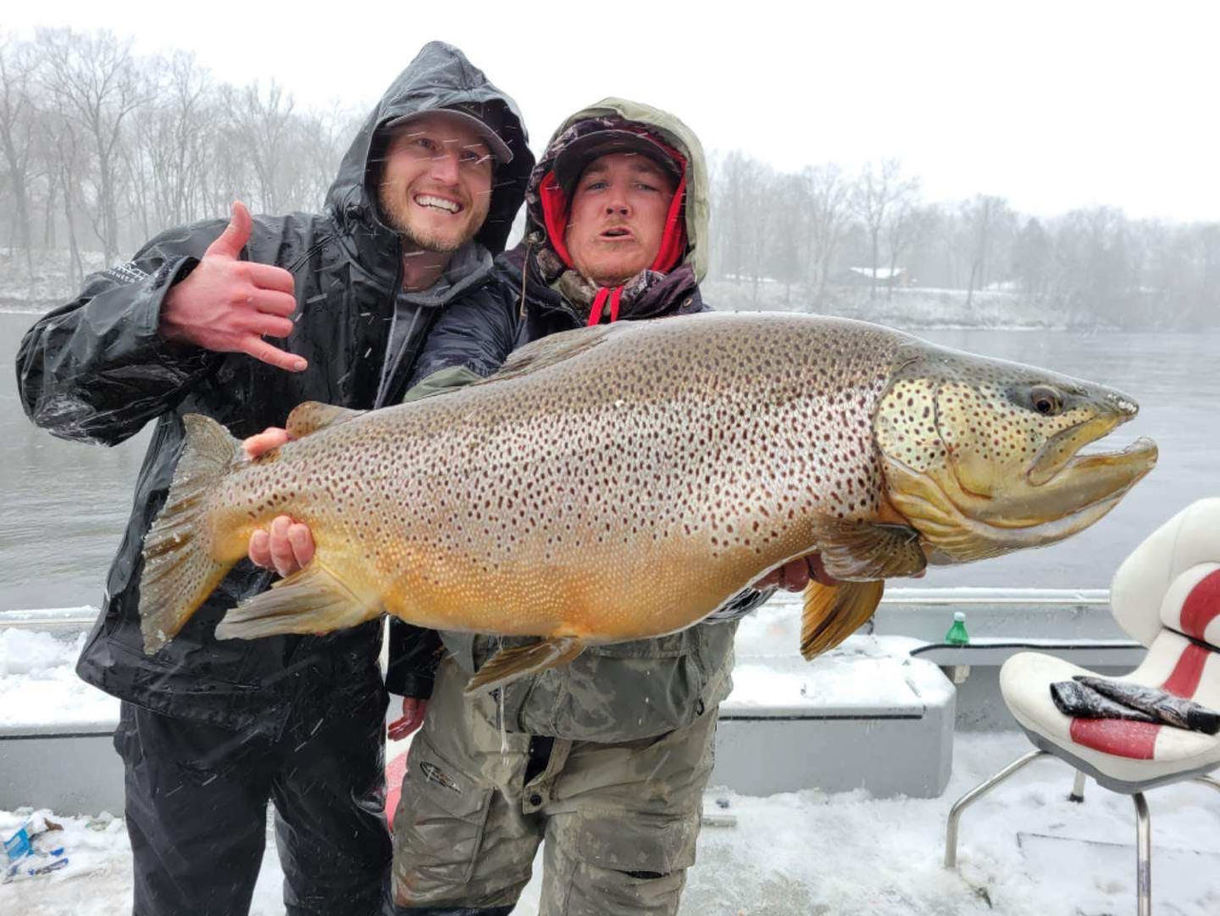 Click on photo for more details, should take you to articiple

Yes I understand. As a Mountain Home native I grew up wading and floating both the White and Norfork. These days I only fish bass tournaments - mostly in Alabama. Never use live bait.

I guess you don’t fish with dynamite either.

Glad you are doing better.

No but you can get a limit fast.

I’ve heard of it being done, but I try to keep my distance from those people.