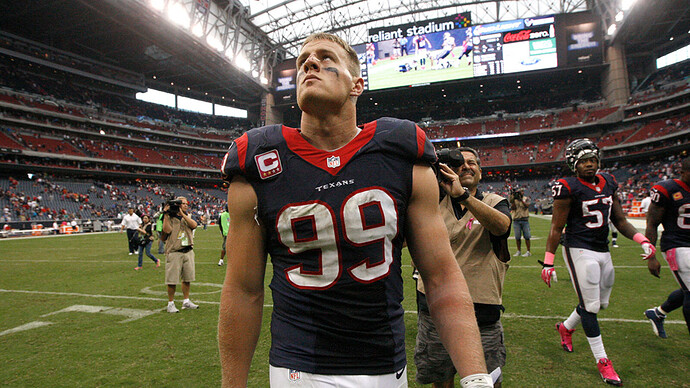 "Thank you, Houston. I love you." The face of the Houston Texans announced Friday that he asked the McNair family for his release.

Its like there are 31 NFL franchises and then there are the Texans, who are so screwed up they don’t resemble any of the others (and you’d REALLY have to be screwed up to make the Jets look competent). And nobody is going to want to play there until they show some evidence of a clue.

A shame he had to waste his prime playing for that joke of a organization.

I expect to see him in Pittsburgh

A shame he had to waste his prime playing for that joke of a organization.

The organization was fine a couple of years ago, Then owner Bob McNair died during the 2018 season. And his son Cal is completely over his head, and has given that nutcase Jack Easterly way too much influence.

They released J.J. Watt…the greatest player ever to play for Houston…strange.

They released J.J. Watt…the greatest player ever to play for Houston…strange.

Good for JJ who spent so many of his good years there. Good for Houston to return the respect.

I would not trade DeShaun Watson. That woukl not be a smart move. He is one of the best players in the NFL. He has a big contract…make him play or let him quit.

He has a big contract…make him play or let him quit.

If he quits you get nothing for him and you’ve got a big dead money chunk out of your salary cap. So that would be stupid. Which means the Texans will probably play hardball with him and he’ll say no thanks.

But the Texans are doing the right thing by saying they have no interest in a trade. One, if they admit he’s on the market the price goes down. Two, it’s in their interest to wait until June to trade him because of salary cap considerations; they can push some of his dead money onto the 2022 cap, which shouldn’t be affected as much by the pandemic.