After driving back from the basketball game late last night and dodging a few deer not far from my home, got a little time on the Norfork River today along with my fishing buddy Louis Campbell. We both caught a lot of trout, maybe 75 total. It was a fun day, although it was frigid early. We were throwing off layers as the afternoon hit and the trout bit for most of the day.

The highlight (for me) was a 20-inch Bonnieville cutthroat caught on a size 18 ruby midge in late morning. This was a wild trout that is from the egg plantings on the Norfork the last five years. It was caught just above the area where the eggs were buried in the gravel in the catch and release area of the Norfork. 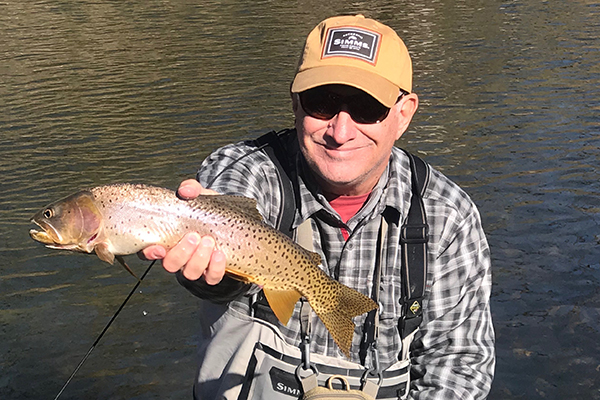 Awesome catch!
I fished swinging bridge on Little Red Saturday morning. They started generating at 7am so we had a few hours. Caught a few before I fell and ended my day a little earlier than planned lol.

A guy fishing just below me was tearing them up with a ruby midge. Unfortunately I didn’t have one in my box.

I tie ruby midges by the dozen. I will never be on a trout stream without some.

I tie ruby midges by the dozen. I will never be on a trout stream without some.

For us non-trout chasers, is this the midge you speak of?
https://theozarkflyfisher.com/shop/details/37/knowles-ruby-midge

That’s it! I tie them with copper beads sometimes, and the Bonnieville took a copper bead ruby Sunday. David is a close friend of mine. He and I have been conspiring on versions of the ruby midge for about 10 years. David is my mentor in fly tying. He says I’m a mentor to him. But I find that hard to believe.

That’s the ruby that David ties for the shops. He is a production tier. Both he and I place the black floss a little closer together and it makes the fly a little blacker.

If you are fishing a tailwater trout stream (below a dam), you should have a ruby midge in your fly box. The tailwater midges have a tint of red (mercury) that makes the wing cases burst when it hits the water and the wings emerge. So when the midge is rising through the water column, there is some red showing somewhere.

So far, the trout have not talked to me. I talk to them. But I think they see red and it’s trigger. So I like red in my midges.

For those who know me, it’s not revealing a secret to say I caught a fish on the ruby midge. I’m known to fish them.

In fact, if I’m on a hot streak and one of my buddies is 200 yards away and can tell I’m into fish, he’ll switch to a ruby. Later, he may find out that I was NOT fishing a ruby at that time. He will be stunned.

Im still very new to fly fishing. I will for sure be getting some ruby midges to add to my midge box. So far my favorite fly has been a red zebra midge.