There is a hint of football in this, but not much. Some will like this, some will be bored and not get it. That’s OK. I wrote it for me as much as anyone else.

The brown trout pictured was almost 24 inches. Can’t tell much with the way it’s curved into the net. That’s a big net. I learned a long time ago if you were going after big brown trout, don’t carry a little net. 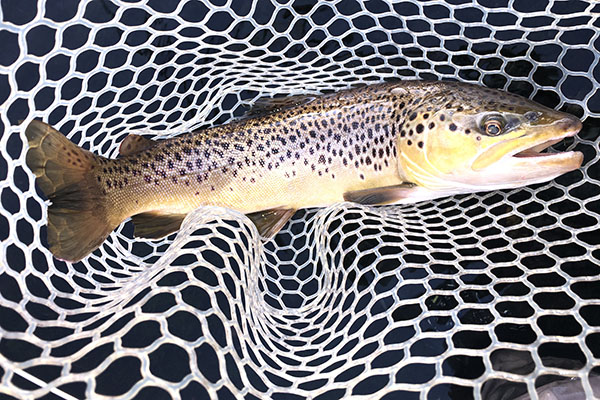 State of the Hogs: Chance to winter fish

There was a time when my fishing trips were planned weeks in advance. That’s necessary when you live 120 curvy miles away from your favorite river.

Clay, your story and theme rings true with me amidst COVID…time away from work. I don’t fish but your story makes me wish I did. I did get a chance to deer hunt this year with my elderly dad and sons, and it meant more this year. It’s been a rough 9-10 months obviously for everyone, but healthcare folks more so…I’m seeing burnout on a lot of folks faces.
I told my wife we MUST get out of town this spring somewhere for a change of scenery. Maybe I’ll get to slip off to the golf course a few afternoons this spring on pretty days?
I really enjoyed your article!

Got out for two hours today. It was windy but I put quite a few in net.

Sounds to me the good old days are the here and now for you Clay. I have been a SW Missouri resident for nearly 50 years but a lot of my heart is still in NW Arkansas where I spent my first 30 years. Heck I was at the dedication of the Bull Shoals dam. North Fork preceded it by a few years. So glad they made that trout fishery so good.

Once or twice a year I go to Taneycomo. That’s a great trout fishery, too.

Are those trout fisheries stocked or are they populated by native trout?

I’m curious because the oldest national fish hatchery is in my home town (Neosho, MO). They produce rainbow trout and have for years. It is a fascinating place to visit.

They support other species as well.

Not native. But some spawn and reproduce. Browns mainly, I think. Rainbows I’m pretty sure don’t reproduce. They stock rainbows heavily. Some do get very big, however. I don’t think cutthroat spawn either. Lots of food and cold, fast water in the White and North Fork. Trout paradise.

Clay has far more knowledge, though, and I’m sure can add to this.

The browns are 90 percent native and reproduced in the river. Almost all of the rainbows (probably 99 percent) are hatchery trout.

Some will say all rainbows are hatchery fish in our rivers but now and then you catch one with perfect white-tipped fins and more color. (Hatchery rainbows like colors – we call them silver bullets – and their fins are short and stumpy from crashing into the side of the concrete tanks at the hatchery.) The ones with perfect fins fight and look like a wild fish. The odds are against there being spawning rainbows. But most who fish our rivers believe that it has happened in some rare instances.

Hatchery fish just don’t have the genetics to spawn in the usual sense. They don’t know where or how. I guess I don’t really understand why, but it see it to be true. Our hatcheries don’t bother with brown trout. They are harder to keep in a hatchery and our rivers shouldn’t have a mix of bad genetic browns with those that have been hatched from eggs in the river bottom in the natural spawn.

Our browns aren’t truly natives. No brown trout in the US is native. They are originally from Germany – hence why they are called German Brown Trout. But we do have wild brown trout in our rivers.

You catch a wild fish – either a brown in Arkansas or a rainbow out west – you know the difference. They fight much harder than hatchery fish. They are stronger, firmer in hand. In short, they are a solid muscle.

When you fish our rivers, you know almost immediately when you have hooked a brown or a rainbow. The browns bulldog down in the bottom or make long runs away from you and strip line off your reel. Rainbows rise to the surface, bounce along the surface like an acrobat and then quickly come to your net.

When you hook a wild rainbow out west, they do the same thing as browns do here and so I get confused on what I have caught.

There is a strain of cutthroats (Bonnieville) that have been planted as eggs in our rivers of late. There is hope they will re-produce. It’s too early to know. But it might happen just like the browns and that strain takes hold. I’ve caught quite a few of late and some of them are as big as 20 inches. They fight great, too, because they’ve spent their entire life in the wild.

Our brown trout fishery on the White below Bull Shoals Dam is incredible. The length minimum was raised to 24 inches about five years ago with terrific results. Now pretty common to catch a two-foot brown. And it’s only going to get better.