OT: Can you guys recommend a place to eat after

the basketball game this Saturday…not a chain, casual and local would be cool. We are staying in Bentonville.

There are a lot of great places on and around the Bentonville square. My favorites are Table Mesa and Tavola.

Yep, the Tusk and Trotter was good the last time I ate there. More upscale choices being The Hive and the Preacher’s Son.

It’s a small chain, but we ate at Fish City Grill in Rogers near the Promenade after the MSU game and thought it was good, too.

Flying Fish off the square in Bentonville is good

Pressroom on the square has an interesting menu and wine list…

It isn’t in Bentonville, but Wright’s Barbecue in Johnson is terrific. Unique setup in an old, white house and has outdoor seating. I’m addicted to the brisket.

My son and I enjoyed The Rail pizza place in downtown Rogers while at a baseball tournament in Rogers. Table Mesa - upscale Mexican? Sounds interesting.

I assume Tavola is related to the Tavola in Tulsa? Italian with a twist? If so, the lunch is better than the dinner (IMO).

Table Mesa on the square in Bentonville is really good. My high school class “Lunch Bunch” went there in July. We all enjoyed it.

Wrights is the real deal. And the brisket is world class. I’ve never been to their restaurant but they brought over a lot of food when my niece passed. They are her neighbors. Fine folks.

If you like Italian, Bocca or Mirabella’s Table in Rogers.

Benton County, and Bentonville in particular, has kind of become a hidden culinary gem. This is a few years old, but gives a good account of what is going on there. 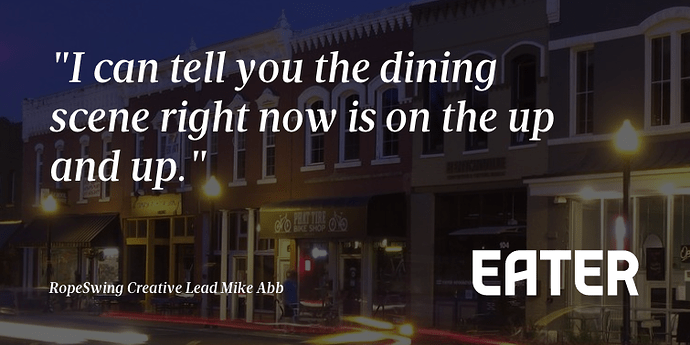 How Walmart's Hometown Is Fast Becoming a Restaurant Hot Spot

How one restaurant group wants to reenergize the Ozarks' downtown spaces.

We liked Oven and Tap as well. Pizza was good and a good selection of local beer.