Anyone smarter than all the others?? Or better?? Or brand?? And buy where? I think Sam’s was our last buy…

I have never had a large screeen, but, once cathode Ray tube was replaced with digital systems the most important thing is the number of pixels. a pixel is three dots and the more pixels, the better the picture but in my opinion not a lot of difference in a screen that may be a few inches larger.

When we bought our new house in 2020, I bought two Samsungs at Sam’s Club, including a 75-inch for the living room. We have had no problems with either. I’ll probably stick with Samsung when purchasing TVs for a while. I like its capabilities.

I like to buy tv technology that’s a year old. Usually at that point it has a good discount on it but is still also relatively new. TVs with brand new technology on board usually still have a high markup and most of the time the other supporting technologies (internet, sound, etc.) haven’t caught up to the new TV tech. Not saying that’s always correct but seems to be more right than wrong.

I just purchased a samsung from sam’s club and like it. I like their interface better than vizio.

I’ve got 3 Samsungs and a Vizio that are 70”, or larger, not a problem with any of them.

I quickly read the long TV thread but didn’t see people post Samsung as their favorite.

I did all the research exactly a year ago and bought this TV, based on reading multiple reviews AND going to see them in person. I’ve been very, very happy with my decision (I got a 75", but you specified 65 so I linked that size of the same model)… The main thing to me is the picture, and this TV provides a spectacular image and brightness.

Take a look at the review I linked as well.

One thing to note…there is a GREAT deal of variance within brands. A friend of yours may have a Samsung (for example) that he really likes and you think has a good picture. But if you don’t buy the same model, it’s oranges and apples even if it’s the same brand.

I found this out when I did my research. You have to know the model, and if you look at the reviews for the various models in the link I’m providing (there is a search feature in that review to look at other sets), you will see what I’m talking about. I did take the time to review before selecting, and it was worth while.

Now, are there better sets than this one? Objectively (according to the metrics) - yes. But at anything near this price point?

Good luck in your search! 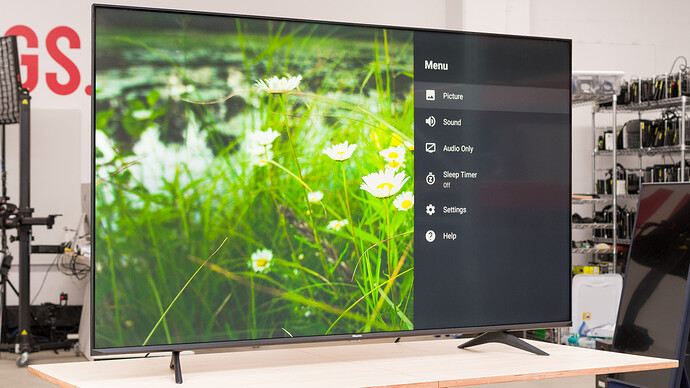 The Hisense U6G is an entry-level TV in Hisense's 2021 ULED lineup. It's a budget-friendly model that delivers better picture quality than most other low-cost TV...

I had the same issue; the table I had was fine for the set I had before purchasing the 75" Hisense, but did not work for the legs on the new set (old set had one wider pedastal base instead of two “feed” spread wide apart).

I considered buying a different table, but the better solution (IMO) was to buy this Swivel TV stand to mount the TV on and sit atop the table I already have. Works great for any TV, as it is adjustable… 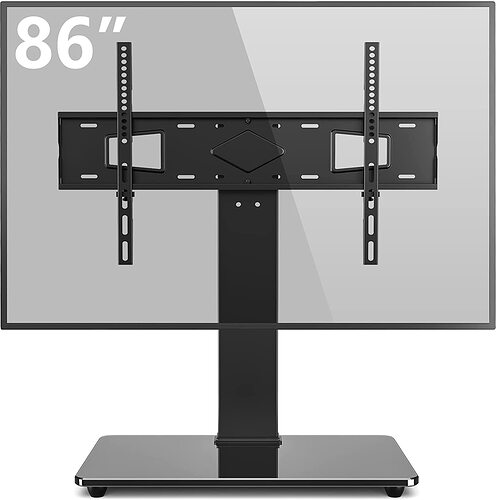 the better solution (IMO) was to buy this Swivel TV stand to mount the TV on and sit atop the table I already have. Works great for any TV, as it is adjustable…

Sweet. I’ve been considering buying a new TV, but the limited size of my cabinet has restricted the potential size of that TV. This would fix that and allow me to raise it high enough for the other things that sit atop that cabinet.

I quickly read the long TV thread but didn’t see people post Samsung as their favorite.

I replaced it with a SONY BRAVIA A9S Series OLED 4K UHD TV. It wasn’t cheap but my A/V Receiver and Blu-ray are both SONY so haven’t had any compatibility glitches between components that I had with the Samsung.

If the SONY lasts as long as the Samsung did, it will outlive me.

As Wiz noted in his post below yours all models within a brand name aren’t compatible. My son bought a 65” Samsung smart tv a few years ago and has had ongoing issues with how smart it really is. He’ll replace it soon.

I had the long thread in December about which TV I was going to buy. It came down to the 55-inch Hisense and the Samsung. Both are excellent TVs, but I decided I didn’t want my dollars going to China even if they got there through Walmart or Best Buy. So I got the Samsung, which was a little more expensive, and I’m very happy with it. I’d be happier with it if the ESPN app didn’t tell me I wasn’t authorized to watch things on ESPN+ which I’ve paid for. But I’ve figured out the workaround: Get the stream going on my laptop and then plug that into the TV via HDMI cable.

As Wiz noted in his post below yours all models within a brand name aren’t compatible.

GreyHOg…I’m not trying to make too fine a point on semantics or spelling…that is NOT the point of this post. However, I think I need to suggest a minor correction in word choice in your comment that makes a significant difference in the meaning of your post.

In the paragraph I’ve quoted above, I believe you mean to have said “comparable” instead of “compatible”. In fact, virtually all modern TV’s would be “compatible” with your Sony devices, or similar devices of another brand. On the other hand, different models from the same manufacturer (Sony, Samsun, LQ, Hisense) are not necessarily “comparable” to other highly rated models sold by those same companies.

That’s why I included the link to rtings.com in my prior post. You can go to the top, put the model number in the search box, and it will provide their in-depth rating for several different elements of the specific model. They don’t have them all, but they do have reviews of most of the popular models sold over the last 2 or 3 years.

Again, my apologies if this comes off as “preachy”. I’m just trying to clarify a point I believe some might have found confusing.

Also, with regard to another point you made…there are other sets that according to expert reviews are better than the Hisense u6g I purchased. The SONY model you mention is one of them - if just by a little. I saw it during my trek from store to store and it does deliver a stunning picture. Samsung also had a highly rated set that I saw.

However, as I recall, both of them (those highly rated models) were north of $2,000 (for the size I wanted - 75"). I’m not saying it isn’t worth it, nor criticizing those who buy them. Hard to go wrong with a top of the line SONY (my first HD TV was a SONY), and the top-end Samsungs have a very good reputation. But for me, I honestly could not tell the difference in picture with my own eyes (between those 3 - but they were definitely a “cut above” the others I saw to my eye), and the Hisense U6G was literally less than half the price of the SONY.

Now, I’m not a gamer - at all. And so I don’t know how they would judge the TV’s. Since that’s not a factor for me, I only care about the picture from DirecTV or streaming from various sources, so long as it has the inputs I want/need.

Sweet. I’ve been considering buying a new TV, but the limited size of my cabinet has restricted the potential size of that TV. This would fix that and allow me to raise it high enough for the other things that sit atop that cabinet.

Sad to say But the amware had to go. Bigger and bigger TV’s.

I thought these were Smart TV’s…