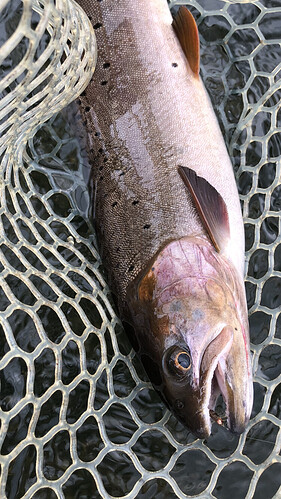 This Bonnieville cutthroat was caught about 6 pm this evening on Norfork River. They shut off generation in a surprise about 4 pm. I went down to wade about 5:30 in the heart of catch and release about 50 yards below shoal where Trout Unlimited planted Bonnieville cutthroat eggs 3 years ago. This has to be from that planting. Jean Ann and I helped plant the eggs.

This was caught during a Caddis hatch sub surface. Probably 16 inches long.

Such great fun. I feel like a proud grand pa. Caught about 15 fish, rainbows except for this tough fighting cutty.

I flicked the fly loose with my thumb and released it without being touched.

Fly fishing can be terrific fun. This was a fish I helped bury as an egg in my river, caught with a fly I tied.

Excuse me for gushing.

Grandpa Clay. Has a nice ring to it…

That’s impressive. I’ve spent a few hundred hours very close to where you fished. I love Mountain Home. I spent many wonderful times there with family.

Not the same fish story, but we just got a now 9 week old Black Lab (named Satch) who amazed our vet by already swimming in our pond, and since he is fascinated with bugs, moths, butterflies, birds, squirrels, deer, and even ate a toad, decided to take him fishing yesterday, knew he’d go crazy over a flopping fish. Went to the garden, put a spade in to unearth some worms, and then he took over, furious digging with his paws until we had a half dozen and a nice spot for a tomato plant. Put the worms in a plastic container, got a rod and reel, and I carried the latter and the worms to the pond and he carried the plastic top that had dropped off the container.

I have had this pond for 30 years and this was the best fishing ever. Caught the biggest bream I have ever caught in the pond, followed by 4 only slightly smaller, as fast as I could bait the hook.

And was he excited? To use a word he only kinda understands now, “No”. What he was excited about was the shade under my chair. He would briefly come out to take a puzzled and disinterested look at each fish, and then quickly retreat to under the chair to cool off.

Must be the black fur that caused this, I know it isn’t genetic, they told me his Mom was in heat and did fine

. I didn’t have the heart to tell him it is only April, that if he thinks this is hot, try June, July, and August.

I had a Pointer years ago who reached in the water and picked up a fish that was on a stringer. I once had a picture, but I have no idea what happened to it.

I had a Yellow Lab who was somewhat of a terror as a puppy. One day the puppy brought to the porch the head of a bass. Obviously from our pond. But how did he catch it? And where was the rest of the fish? He never told me.