Pretty much the usual suspects: BYU, Cincinnati, UCF and Cougar High. In spite of Tilman Fertitta being a jerk (or perhaps because of that). Timetable to be determined but could be pretty quick. 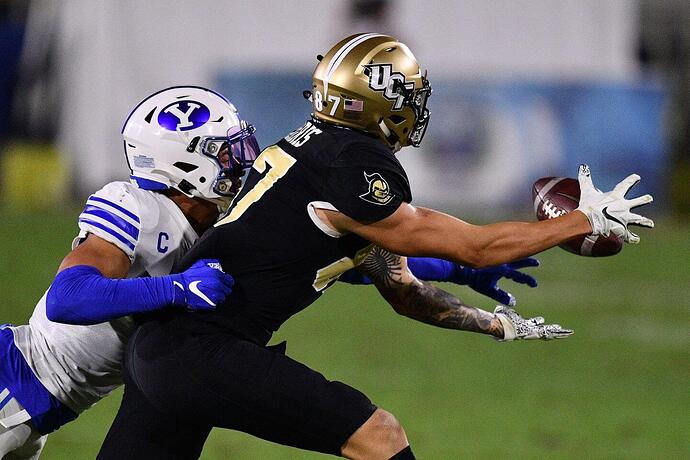 If Big 12 ADs can reach a consensus on which members to invite, sources believe it’s possible that the process could move faster than initially anticipated.

It’d be a far-flung conference, but that’s probably their best option

I’ll probably go to hell for saying it, but I’d like the O-8 to survive at least long enough that TX & OU have to pay those big exit fees.

The one thing that could still blow this up, since the PAC 12 isn’t doing anything, would be for the B1G or ACC to raid the O8. Which would seem to boil down to KU and ISU to the B1G. I don’t think that’s likely but I’m not in Kevin Warren’s text circle either. I think the AAC raiding the O8 and replacing it in the Power Five was a pipe dream.

Pretty much the usual suspects: BYU, Cincinnati, UCF and Cougar High. In spite of Tilman Fertitta being a jerk (or perhaps because of that). Timetable to be determined but could be pretty quick.

I would think Colorado State would be appealing, to get back in that market.

I wish they would get desperate enough to add New Mexico. I lived near campus in Albuquerque for a while and really enjoyed the place. That would give me a team to pull for in that conference. Boise State would be interesting too.

ESPN reporting tonight that those four will apply for admission to the O-8. Could be approved as soon as next Friday.

Will that speed up the arrival of Texass and OU to the SEC?

Doubtful. They still want the $80M.

Doubtful. They still want the $80M

Prediction…there will be some posturing, one side waiting out the other, etc. But eventually, both sides will realize that it’s in their collective best interests to “move on”…a settlement will be reached (significantly less than the $75 million being discussed) and Texas/OU start competing in the SEC in 2023.

Which is pretty much what I’ve been saying the last month, before this recent development. But this apparent action will fortify that predicted path. From the Big whatever side…once you’ve identified new playmates, there will be an urgency (from current members and especially the new members) to get scheduling in place, sooner than later. And you can’t do that with the specter of two “kinda” members floating out there.

8 out of 10 have to vote before anyone gets accepted. Wonder how OU and Texas will vote?

I have no idea how it might develop. I’d think the new schools would want part of that OU/TX money. I’d also suspect the O8 would let them share in it. However, there might be some benefit in starting the new rotation. Maybe some middle ground is reachable.

I’m still pulling for OU/TX to have to fork over a bundle of cash.

What will happen downstream after these 4 schools are added. The conferences they leave will have to regroup or expand in some way I’d think. Would an App St or ULL move? Is there enough of a pecking order in the remaining G5 conferences to matter? The current AAC seems to be the best of the rest. It badly wants to be part of a “P6”. Losing UH and Cincinnati hurts that prospect.

It’s possible the O8 will expand again to maybe 14 if it thinks there is strength in numbers. Add Boise and Col St for instance

The other eight will vote to accept the four noobs. Doesn’t matter how OU and EOE vote.

There are reports that the Sun Belt will try to raid the AAC to become the top G5 league. I can’t imagine that succeeding but…

So the new O12 would be in Utah, Texas, Oklahoma, Kansas, Iowa, Ohio, West Virginia and Florida. I’d think if they go to 14 they might try to fill in east of the Mississippi. Memphis and Charlotte or UAB maybe?

There are reports that the Sun Belt will try to raid the AAC to become the top G5 league. I

I’d think it’d be more likely for the AAC to do the raiding.

I guess the theory is the AAC is weakened by losing Cincy, UCF and UH and thus vulnerable.

I hate Fertitia every time he shows up on CNBC, he would love to be a royal anhole for the conference to deal with…