Only 4 P5 schools have not taken in a transfer

Four power conference programs have not taken a transfer this offseason:

Another indicator of heavy dependence on transfer portal in roster management. Why were these four sleeping on the portal?

Might have full rosters? I suspect it’s hard to transfer in to Stanford.

UConn, Stanford and Nova all have top 21 classes coming in.

I think Purdue had a couple of guys enter the portal and then decide to stay.

This chart from a Purdue site (early March) says they have one scholie open, but that’s 3.5 months old and I don’t know if there have been any changes

(As an aside, I love this chart and I wish we had one pinned on the board; I’ve seen charts like this for several Big Ten teams). 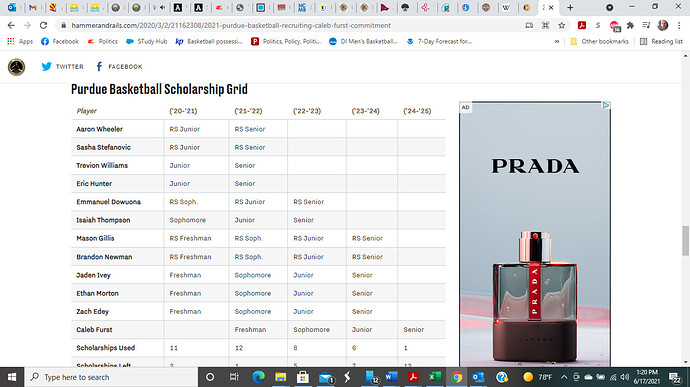 Yes, it would be very helpful to have one like this for both our men’s and women’s team

OK, Purdue signed two other high school kids in addition to Furst, Trey Kaufman and Brian Waddell (whose dad was a teammate of Matt Painter’s at Purdue). However, Aaron Wheeler (top of the grid) entered the portal and is going to play for Mike at St. John’s. So they’re full at 13.

All three Purdue recruits were all-state in Indiana and Furst was Mr. Basketball.

I found some information that Stanford received 2,352 requests from transfer students in 2019 and accepted 27 of them. That’s 1.15%. Yeah, it’s hard to transfer to Stanford. I’m sure they could grease the wheels for an athlete somewhat but he’d still better be really smart.