On Ty Clary finding his voice and footing on OL

“It’s starting to mean more to Ty. I think he’s really taking a leadership role and doing a really good job of bringing other guys along," offensive coordinator Joe Craddock said this week: 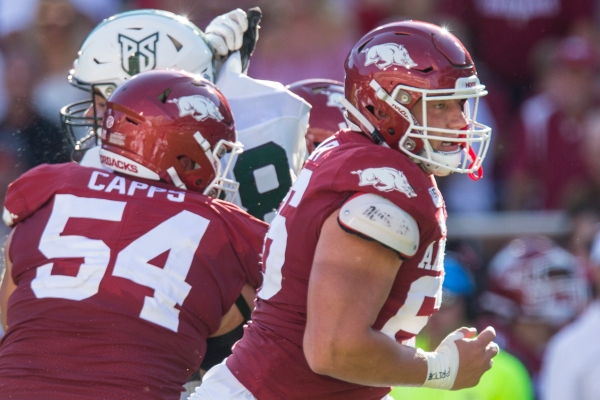 I saw that when it happened… he has made tremendous improvement from last year to this year, very proud of his development.the challenge will become much greater obviously once we get into the SEC but to this point he has been by far our best OL.

Well, he is a junior…although he should be a redshirt soph.

Good for Clary, though. He’s suffered through a lot of crud.

Any chance he finds a way to snap it quicker? Possibility we make a change at C next year?

Should be a 3 man race for center. Clary, Jones, and Clenin.

I would not rule out limmer getting a look at center. I think he will play somewhere next year, in my opinion he should have played this year.

Like Limmer a lot…glad he RS given it was a 2-10 disaster of a year.

Bottom line, Ty Clary is not a good enough center to play on an SEC OL

He has been good enough for the SEC’s worst team

Looking forward, instead of dwelling on the past, we now have what many believe to be an offensive line guru, so it would seem to be appropriate to wait and see what he thinks about a player’s skill level.

Actually Clary and Stromberg where the two most consistent OL we had. I have to admit he surprised me, saw him make him very good blocks… the center snap obviously must improve dramatically and I think him putting on about 15 more pounds a muscle you will see him become even better . I’m looking forward to seeing how coach Davis and CSP transform this offensive line.

It ain’t happening - and Dudley I’m sorry, he is not

It ain’t happening - and Dudley I’m sorry, he is not

Not sure where there is anything inaccurate about him being good enough to be the center for the SEC’s worst team.

Now if I had said he was not a great player, maybe you could tell me I was wrong. But I did not say that.

This team needs competition in the offensive line. And, they need some size. We will see what happens as far as the second signing period to know if there will be a few first-year players who are able to step in next summer. I do recall that Sam played true freshmen when he was O-line coach at Arkansas.

By “first year players”, I would assume that you mean from the transfer portal or junior college. It is very difficult for a true freshman to transition to the college level in his first year. I would guess that there is not much chance for many freshmen unless the team they are going to has a real problem with the offensive line (oh, that is us isn’t it!).

I mean first-year players. That can be freshmen, JC guys or grad transfers. Denver Kirkland and Sebastian Tretola are examples from Sam Pittman’s past at Arkansas. Does not mean they have to start. But they can increase competition and depth.

I believe Dan Skipper started from day one.

I don’t think Skipper started from day one. My recollection is that early in his freshman season he was on special teams and blocked a FG attempt at Rutgers and after that he started in the OL because it became apparent that he was the better option over a more experienced player (not just in the long term but also in the short term).