On the weekend of Arch Manning's official visit

To Texas, The Athletic reports that EOE spent $280,000 entertaining recruits and their families. This included five-star hotel rooms in Austin, transportation to and around Austin, food spreads, a $30,000 buffet dinner at the stadium (no Catfish Hole needed) and a social for the parents and coaches which included a $12,000 bar tab (lots of Tito’s served, apparently).

Here are the details, obtained through open records requests. 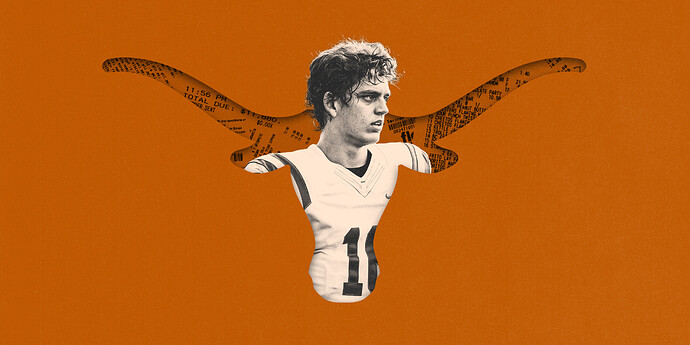 Inside the Texas spending blitz that hooked Arch Manning and a No. 2...

While my post has nothing to do with the recruiting soiree the Horns threw and will likely repeat or exceed to reclaim what they feel is the rightful place in football royalty, seeing the Manning name has me posing the question about peoples thoughts about the esteemed Manning family shilling a gambling site. Kind of surprised with the reverence they are held in with the sports world that they accepted this role. I know that sports gambling is big money and mainstream, and while I chose not to be involved with sports betting, I am not against gambling, it just seems strange to me that Archie and family are lending their esteemed name to this.

Gambling runs the NFL now. The only reason for reporting injuries is to assist the gambling industry. I suspect the Mannings just are folowing the NFL life…

Aloha,
If UT and it’s supporters can afford a $280K lavish weekend hosting recruits and their families, imagine their NIL budget! Beyond my comprehension. Which teams can compete at that level? OU, ATM, Bama…?
UA…Campus of Champions

The only reason for reporting injuries is to assist the gambling industry.

I wouldn’t say it assists the gambling industry. But if injuries weren’t being reported and Joe Gambler knows the cousin of the assistant trainer who says Tom Brady isn’t going to play this weekend, that’s inside info of enormous value to a bettor. So rather than having people trying to bribe (or worse) team staffs to give them the inside scoop, they get the info out for everyone.

I’m glad the shorthorns wasted their money, Manning is not worth it. He’s just another example of a media-driven frenzy. Against good competition, he was at best, mediocre.

I’m glad the shorthorns wasted their money, Manning is not worth it. He’s just another example of a media-driven frenzy. Against good competition, he was at best, mediocre.

Not ready to say that but there’s no doubt the media loves to hype him because of his family.

It wouldn’t surprise me if he becomes the next Mitch Mustain. A #1 ranked QB that should have been a low 4-star ranked QB that makes a decent Power5 back-up or mid major starter.

Texas better go buy them some mean stud DTs and OL that can compete in the SEC. Arch isn’t going to put them over the top, but drastic improvements at the line of scrimmage could.

So rather than having people trying to bribe (or worse) team staffs to give them the inside scoop, they get the info out for everyone.

It’s self interest. They don’t want a scandal. If it also helps the gambling industry so be it.