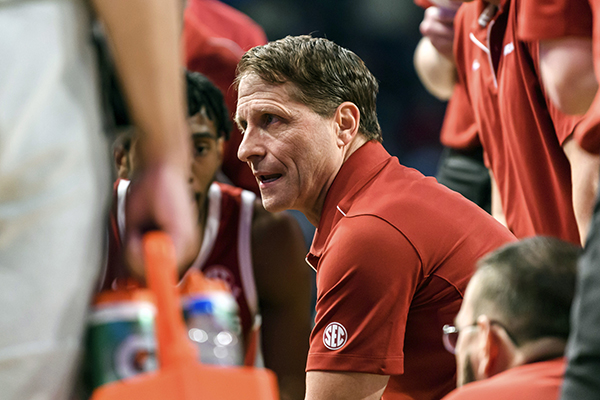 Past coaching matchups with NBA head coaches influenced the Eric Musselman philosophy of not calling a timeout at the end of overtime at Georgia Tech.

I “trust them”…for sure, 'cause they make 30 foot shots at the buzzer.

I didn’t question not taking a timeout with 22 seconds left. I wondered why he didn’t take one after the shot, with .1 seconds left. I don’t know enough about the rules and just figured we didn’t have the ball and we couldn’t, but I remember a LOT of times when the team that makes a last second shot and still trails, will call a timeout. We could have easily gotten a technical foul for delaying the game or having more than five on the court. I’m glad the officials understood the situation and actually took their own timeout to determine how much time should be on the clock.

I think we get too caught up in our definition of 'coaching". What was he gonna tell them to do with less than a second left on the clock? Why allow the opposing team a chance to get organized?
That was one of things I admired about Phil Jackson. He never got caught up in the whole “look at me coaching” ego trip.
The Bulls would be screwing up and he’d be sitting in his seat without a care in the world. He always subscribed to the 'let them work it out themselves" style of coaching.

He wouldn’t tell them anything. He would take the time out so that we didn’t get a technical. But, he may have also gotten a signal that the refs would have to go to the clock anyway, so perhaps that didn’t matter. It just seemed like he was very worked up on the sidelines trying to get the players to prepare for the inbounds and quit celebrating. A simple timeout would have solved that.

I don’t know enough about the rules and just figured we didn’t have the ball and we couldn’t,

The rules state (maybe not in these exact words): Either coach may call a timeout if the ball is dead. One major definition of “dead” is “if the ball is in the hands of the referee”. So, if both teams have returned to the court after a timeout and are getting set, the ball is dead if it is in the hands of the ref. Once he hands it to a player on the receiving team, the ball is no longer dead and only that team’s coach can call a time-out. So, CEM could have called time out if both teams had returned to the floor (Ark with 6 players?) so long as the ref still had the ball in his hands.

To call a time out or not to call a timeout? I think I’ll heard this conversation in the past, and boy did that coach catch it…

Personally I would have done nothing. I think they would have to tip the ball in after a length of the court pass. If the can do that they deserve the win. I’m sure Muss will use this as a teaching moment. Absolutely no celebrating until you hear the buzzer.

As time wound down close to zero, It was a miraculous shot. Whether done by GT or the Hogs; it was majestic. That’s why it circulated as the shot of the day for a bit. The best thing for the refs was to allow things to settle down…and then play that last tenth of a second even - and the Hogs won as they should have.