Much more on Justin Smith’s 22-point, 17-rebound outing vs. ORU, which included a career-high 10 offensive boards: 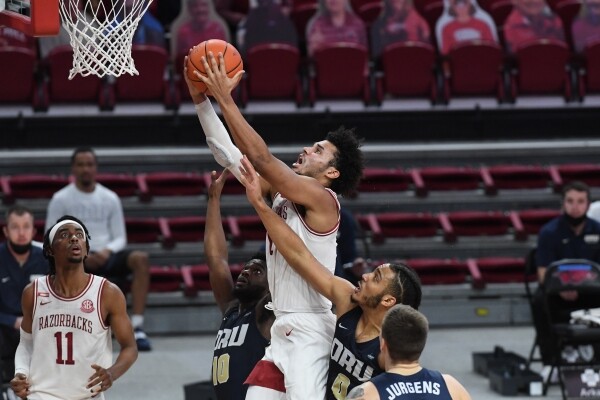 Arkansas coach Eric Musselman isn’t sure he has coached a better offensive rebounder in his college coaching career than Justin Smith.

Unbelievable stats for a 6’7" guy…but, he seems to play best in and near the paint.

I think that’s how he will have score.very tenacious going after the ball, great in transition too.

Yep 6’7”” with 40+ inch vertical. He gonna have to play even bigger now that conference play starts. He had to play thru some adversity today early but he kept working at it till it all came around. Sign of of really good baller.

had to play thru some adversity

Part of that was stopping his 3 point shot that was failing.

Yea his 3 bricks from 3pt land stopped. But he wasn’t the only one shooting those in first half. He also had a hard time making shots close to the basket early on. But like I said he just kept working and they started falling to go along with his rebounding on both ends.

He missed at least 4 under the basket. Could easily have had 30+. If he can keep his energy level, he is going to overwhelm on both ends.

Arkansas’ stat system had him down for six missed layups in the first half. I’m going to shot chart this game tomorrow. Curious to get the actual numbers at the rim/in the lane.

Arkansas’ stat system had him down for six missed layups in the first half.

That brings a question I’ve wondered about. Stat-wise, are blocked and tipped shots, whether at the rim or not, considered both missed shots and blocked shots? Along with that, are tipped shots not considered blocked shots. I noticed in Connors monster block game he had several “tipped”, balls causing the shot to miss, but weren’t counted as blocks.