"I have a lot more confidence than I did last year.” 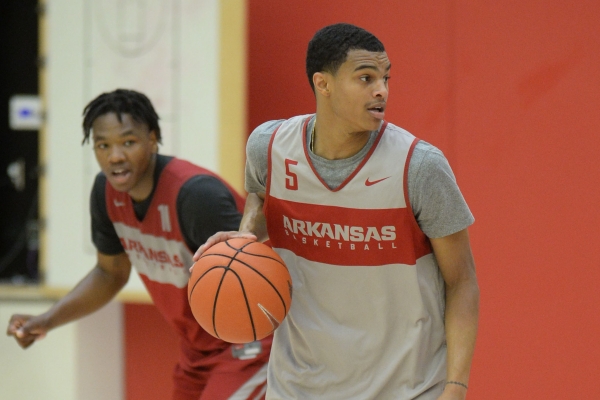 There was one glaring weakness in Arkansas guard Jalen Harris' game in his first season with the Razorbacks.

Sounds like he is more confident in himself I can’t wait to see this team play Should be an exciting team to watch and Arkansas Basketball is back big time! WPS!

Good article. He is an above average athlete in terms of ball handling, quickness and hops. If he can get close to 30% from deep it will open up the lane.

FYI that guy in the picture behind him is JD Notae and not Whitt.

Thanks. I don’t write cutlines, but I’ll correct it.

Edit: The cutline is correct. I cropped out Jimmy Whitt when editing the photo.

great read, as always, Scottie, thx so much. I just love all these stories on how hard to guys have been working and seem to be buying in to the new staff. Can’t wait for the season to start!

We will see. It seems we heard the same thing about his 3 point shot last year. I hope it is true

I’m sure it was discussed, but I’m positive it wasn’t to this extent. Don’t remember anyone within the program talking about him regularly being in the gym at 6-7 a.m. putting up hundreds of shots.

I hope those that counted out Harris will have to eat crow.

You do 6 am thing in the off-season. You can’t do that practically once the season starts. In the last off-season, he did not know how bad he was going to shoot. He had shot 25% at New Mexico and probably assumed that he would do better than 25%.

So, I am sure he did not do 6 am thing last off-season. What are your thoughts on that Scottie? Does that make sense?

Confidence, or lack of confidence, was key for Harris last year. I’m going from memory here, but I’m pretty sure that Jalen was 3 for 3 (or something close) on 3’s in last year’s Red-White game. I remember his outside shot was a concern going into the season, and I think he actually shot it pretty well in the exhibition season. Then the first game, against Texas, he was 0 for 5. The next game he was 0 for 1. He finally hit one in the third game, going 1 for 3. I think he entered the Texas game feeling pretty good about his shot. The 5 3-point attempts seems to support that. Then he never really regained his confidence the rest of the season.

I don’t know that this will have anything to do with this season, but I suspect he may have to prove to himself that he can hit them in games.

I think that’s fair. If he is serious about lifting his percentage then he’ll still find time to get extra shots up during the season, just maybe not at 6-7 a.m.

“In the last off-season, he did not know how bad he was going to shoot.” This is probably spot on. Like I said, I think we’d have heard about his early morning shooting efforts if he did so before last year. I’m eager to see how confident he looks in his jumper on Saturday.

I’m betting that CEM and staff corrected that. We’ll be able to see that in the red-white and exhibition games if that’s been corrected. Improved confidence may improve that also since he won’t subconsciously feel a need to guide the shot.

The thing about that correction is that as you said it is about confidence. If he loses that confidence, the hitch will be back as he starts guiding the shot rather than shooting it.

anyone shooting 25% had better shoot a LOT of shots in the off season. if he didn’t, then that’s on him and the coaches.

heck, no one worked harder than Larry Bird and Jordan, they were the greatest players on earth and also the hardest workers.

Everyone needs to work HARD. Lebron James, Kyrie, everyone. much less a college guard who’s shot 25%. And everyone knows this. Again, if he wasn’t working a TON on his shot last year, that’s on him and on his coaches.