Before Saturday, the last time Arkansas had 8 sacks in a game was at Auburn a decade ago.

On the Razorbacks’ pressure vs. Missouri State, and Drew Sanders, who led the way with 2.5 sacks and was dominant yet again: 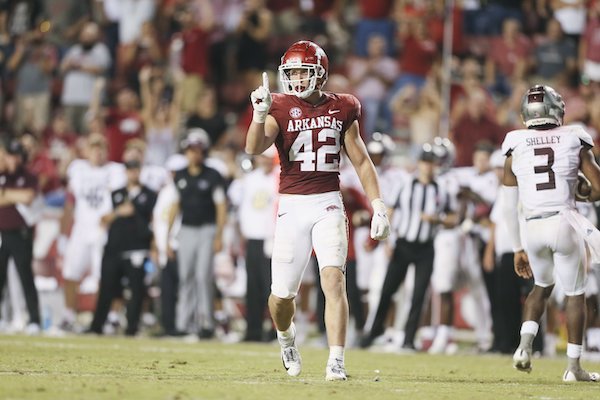 Arkansas safety Simeon Blair loves hearing the roar of the Reynolds Razorback Stadium crowd when it comes within a few seconds of him dropping into pass coverage.

Sanders will definitely play on Sundays.

He’s amazing. We’re lucky to have him and we’re gonna miss him!

He is tied for the national lead in sacks (5.5) with a kid from Michigan State. Jordan Domineck, despite playing a fairly low number of reps at D-end, is tied for fifth nationally with 4.0. Zach Williams is tied for third in the SEC with 2.5 sacks, trailing only his teammates.

I bet when the NCAA updates team stats, we’ll lead the nation in sacks. Sparty came in with 12, left with 14. We have 17.

all our pressure is outside and no interior pressure, is Isiah Nichols actually still nursing an injury? gotta have interior pressure to be disruptive against the big boys of college football or NFL. Drew as a pass rusher takes away from Drew as a LB. Zach Williams needs to be the dominant pass rusher or Jordan Domineck preferably from LDE.

Sanders is coming up the middle.

I watched 33 quite a bit last night, he was really struggling with their center. I couldn’t tell if he was injured or not, but he wasn’t getting any push

Sanders is coming off the edge on all his sacks

We have used “middle” blitzes earlier in the year. Last night, we discovered we could exploit their LT who rarely got help from a TE or RB rubbing the DE/LB on their way into a route. Typical Bobby, as we remember the beating Tyler Wilson took.

The middle blitz was tried out in the first half but they were able to clog up its progress and that allowed the QB to scramble or extend plays.

We did not dominate the LOS until late because the DL kept going too far upfield. Late in the game, when we shut them down, the DL engaged the OL and held ground while the blitzer picked the hole given to them by the OL. That’s when we discovered the LT issue. Dominick and Sanders coming at one guy is pretty unfair.

Nichols may be hurt, and we might need a better push there. I did not find his play deficient in the least last night.

In the story attached at the top of the thread, Sam has a quote that reads, “We’re putting him on the edge, putting him inside over the guard.” He is doing both.