On Devo Davis and the role his confidence can play

"That’s the Devo we all remember.”

Wrote on Devo Davis’ love of game-punctuating dunks, his two-way play in Tuesday’s win and the impact a very confident Davis can make for Arkansas down the stretch: 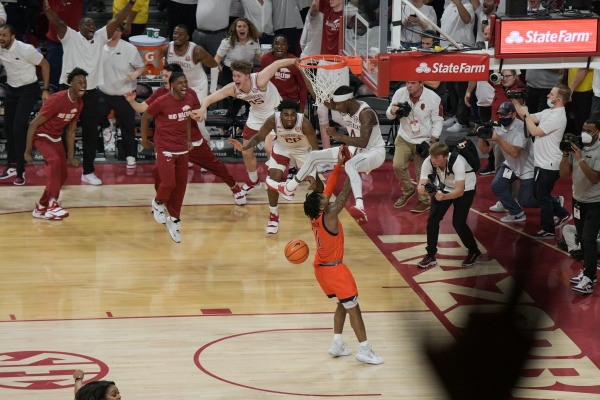 'That's the Devo we all remember': Confident Davis key to success down the...

Clint McDaniel likely has the most well-known non-counting basket in Arkansas history. But Davonte Davis gave him a run for his money on Tuesday.

Hope Devo keeps it up, the scoring that is. Need him to take some of the scoring pressure off of JD.

We need him to ball out like that EVERY game from here on out.He can really help us if he can shoot like that every game …hope he can keep it up

We need Devo to make a deep run in tourney

We need every player that’s on the roster to be able to come in and make plays! Devo is capable of making a big impact on any game he plays. His confidence is back. I hope he gets back to a post game interview soon

Devo is back to playing consistent pestering defense. Making plays and steals scoring in transition. Or being in the right spot for a rebound or 10-12 ft shot around the lane.
When he is making those plays, he seems to hit a big 3 pointer in all of that as well.

I think all of that trying to do to much on offense earlier and the TO’s piling up really effected other areas of his game.

The Devo of late last year is back.

We need him to ball out like that EVERY game from here on out.He can really help us if he can shoot like that every game …hope he can keep it up

He’s not going to shoot like that every game. He’s not a good shooter—especially beyond 15 feet. Devo is a 25% 3 pt shooter and a 42% shooter, overall. Before hitting 2 3s Tuesday he was 2-20 in the previous 13 games—an almost 2-month span.

But, if he can get steals, loose balls, hustle points, rebound well for the position, keep his guy in front of him and take good shots, he will be a very important piece.

He is not—and never was—the Sidney Moncrief comparison that was heaped on him. That was crazy talk—unfair to both him and Sidney.

But, if his mind is right, he can be good. He already has 2 iconic moments in Hogs history under his belt.

I just prefer to see Devo take the midrange shot and attack the rim.
His 3 point shot should be used when the shot clock is running down or when he has his feet set and it’s a catch and shoot 3! Man he is flat playing now!

I think Devo can shoot like it every game as long as he gets his feet set…all those other games he’s rushing shots ,he was under control the other night ,took good quality shots, Let The Game come to him and made them… He balled out like that pretty much every game down the stretch that’s what I’m talking about we need that kind of game from him…I think everybody’s a better shooter when you getting shots that you are comfortable making. I don’t want him to become just a 3 point shooter but to go through a stretch where You are 2-20 which is only 10% and still average 25% for the year should tell you he’s had some other games where he’s shot the ball very well from there and I believe it’s because he’s a better with his feet are set and he’s lined up correctly

Some of that 2/20 is at the end of the shot clock and no choice but jack it up! Other are off the dribble or step back. Those aren’t good shots. He can make the 3 when it’s catch and shoot! The mid range he was deadly ending last season. He normally is good from the free throw line too! He need to continue to play well but he has tried this season to do too much on offense!
When Devo plays well it helps the team just like any other player that plays well.

Notorious, I’m probably off base, but when I (and others) said Devo’s Game was a lot like that of Sidney, we weren’t saying that Devo is as good as Sidney.

We were saying that his game (strengths, weaknesses, etc) we’re a lot like Sidney.

In your post, you listed Devo’s.
attributes……very similar to those of Sidney.

I think Devo can shoot like it every game as long as he gets his feet set…all those other games he’s rushing shots ,he was under control the other night ,took good quality shots, Let The Game come to him and made them

I guess that’s a theory, but it has never really happened. He is what he is and that’s fine. He brings a lot to the table. He doesn’t need to be shooting many 3s. When he shoots on balance 12-footers he’s fine.

He’s a phenomenal loose ball getter. Unless they had an angle we didn’t see, I have no idea how they overturned that call on him.

The angle they showed, both feet were clearly still off the floor when the ball left his hands. Don’t see how another angle could change that. Just a little home cooking in a tight game.

Only one call but it was a big one. Went from up one with the ball under a minute, in control, to Bama going up one and having to come back. Regardless of what had happened prior to that, that call decided the game.

He had an awful day today no way to sugarcoat at all he had some good on balance shots just flat out and missed them he has not been very reliable this year and we need him to get back to where we can count on double digit points, 6-7 rebounds and a few assists.maybe he will catch a groove right when we need him to at the end like last year

Devo NOT as good as I thought or we all did. Way better than most players but college ball is different.

He is just not been reliable for us this year,maybe the expectations of him were too much for him to handle and he’s trying to live up to them. I think he can still be a very good benefit to us if he will just let the game come to not a good enough shooter to be trying to make some of the shots he’s shooting. I think he’s pretty good when his feet are set and he squared up but he is not going to make many of these on The Run shots

Not gonna blame this one all on Devo. He was hustling to very end like always. I seen plenty of other mistakes out there.
Just chalk it up to a let down and sloppy play on the road after a big win.

Not blaming Devo. He played hard. Made some plays. Almost (did?) made the play of the game.

Lykes really hurt them. Toney was dominated (some of that wasn’t his fault). JD was taken out of his game.

This was just an earlier Devo thread that has carried into today. He’s simply not a shooter and the Moncrief comparisons were laughable and embarrassing.

But he can be a really good college player if he sticks to his strengths. He is a phenomenal loose ball, broken play guy—just needs to harness the live-ball, no look pass TOs down 9. That’s easier said than done for a player who thrives in chaos.

All good points notorious and spot on.
I was mainly replying to the recent messages here about Devo. To much was expected of him this year & he tried to live up to that.

As for today I expected both teams to not be up to par. Game was handed to us by Bama.
We shoot just 2% better from anywhere - Floor, 3Pt, or FT’s we win.

Yeah you know it’s not going to be your day when you get three great offensive rebounds in a row and go up and Miss from 6 in away the chance of that happening are very very slim. Alabama knows they got incredibly lucky today. Devo not the only one had a bad day today
Keep working hard young man I still believe in you