On Devo Davis and his success in transition

I asked Eric Musselman today what makes Davis so effective in the open floor aside from his length and speed: 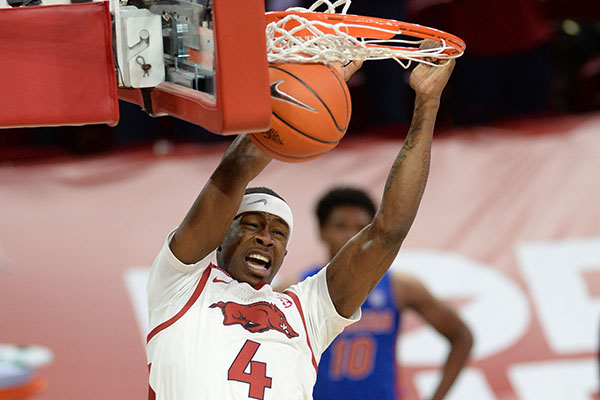 On the run: Davis dangerous in open floor

Davonte Davis is a handful in the open floor. Florida learned that the hard way on Tuesday.

Against experienced juniors and sophomores…real hope for the future, and near future.

The guard play should improve and take another step forward next season
I like the way the guards rebound. I hope their decisions about when to drive to the rim and when to pass improves. Our hogs had a lot missed at the rim in the Florida game! Those misses keep Florida in the game.

I’m glad there hasn’t been a “Muss” on the other bench to take away that left hand from Devo, similar to what we did with Sahvir Wheeler. It’s a severe offensive weakness of his, only being able to go left. Now, that said, he’d still impact the game because he does so much more.

I know that will be a big emphasis in the off-season, and I expect Devo to come back next year much stronger with that right hand.

Teams are taking away his left hand – but it’s almost impossible all the time. He’s just long and fast and slithery like Muss said. Slithery is also a term used for Grant Morgan with the way he plays linebacker. If you can slither, you are a tough out.

Lefty guards are tough to adjust to in many instances. Anthony Peeler had that at Missouri, although it seemed like he did nothing in that 1994 game against the great Arkansas guards.

Devo is so long and so quick that it’s hard to get under him and take away that left hand. I see teams try and he is patient. In the open court, hard to take away the left because he’s going FAST.

He has a fantastic stride to the basket that is incredibly difficult to time for defenders. It reminded me of a guy I played against way back when (pick-up game). He wasn’t tall at all. Yet, no one could really stop him from getting to the basket because his wingspan and stuttered timing of his stride.

It’s great to watch when the player doing it is wearing a Razorback uniform.

To think he was almost a Cowboy…

Someone show Devo the SI cover with Sidney dunking. He could pull that off. I don’t think Devo knows how high he can actually jump. He is still growing into his athleticism he has the chance to be explosively good.