Arkansas not yet worked out in full pads, but Julius Coates has received colorful reviews from Barry Odom and a number of teammates.

“He has everything,” Dorian Gerald said. More: 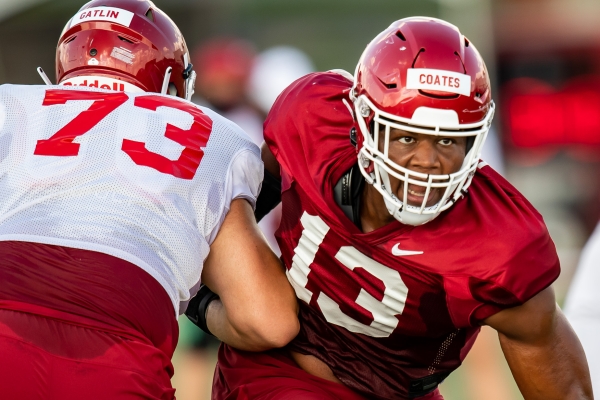 'He has everything': Coates turning heads in camp

Arkansas has not yet worked out in full pads, but Julius Coates has received positive and colorful reviews from Barry Odom and a number of teammates.

That dude is huge and athletic looking. I saw some practice video from today with him in it. Holy cow. 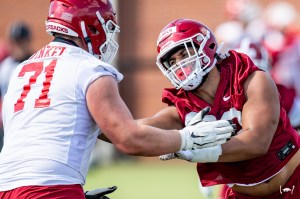 man, hawgjaw, you’re not kidding! 13 looks like big brother is practicing with the little brother’s team! Soli looks tiny next to him, even Gerald. wow.

Right after that is some LB video, Zimos is still lean and lanky, but has clearly gained weight. Bumper and Parker look great, really hope Parker can play like he looks this year.

I think Jayshaud Stewart has a chance to be special, he plays with intensity that most don’t play with and I can tell he’s been in that weight room.

I live pretty close to SMU’s campus. I occasionally go walking and stop by to watch them practice, from afar admittedly. Watching a few practice videos of the Hogs, I hate to say it, but our athletes on the whole, still more resemble SMU’s than LSU’s or Bama’s. Coates stands out in that regard. Still have way too many guys with comparatively skinny arms and legs.

We do have a few athletes the SMUs don’t obviously. I think Sam will recruit and develop. But the Chad Morris SMU influence needs to get washed out. I think Sam gets it and will do that.

Have you walked by a Hog practice? Things are much different when you see them up close. IMO we are not near as bad as it’s looked under Morris-BB. Coach P will have to develop depth but we can throw out some talent one deep. Morris did recruit decent.

No, have not been in Fayetteville this year. Just going by the practice videos. Better size, more effort and better execution will go a long way toward righting the ship. I hope you’re right that it’s better than it looks on video. Quite possible.

I hope I am right also…LOL…I know when practices are open and I can get close to the players it’s always different than when you see them on video. Our strength staff that left were as bad as Chad IMO. I do training with HS kids and am a big guy. The strength and speed staff is as important as any coach in college. Except the HC. Training can make such a huge difference especially on the lines. I wish we could get to the point where we could sign lineman who come from a poor school with zero training and redshirt them then just weight train for two years. Lineman can be developed more than any other position. Our lineman did not look like freaks and that is weights. Off course there are guys who are born freaks but even they have to train. Squats squats squats change a big kid into a grown man. Last staff was more about body building. Won’t take a long time but might be a year or so. Two at most to see us quit giving up forth down sneaks for two yards every time. Need to pay and keep the two guys they have now.

Thanks for your input. Welcome and let’s hope we shock
college football this fall. In another year or two, teams will not be thinking of our Razorbacks as a breather.

AMEN! I know we are in for a murders row of a schedule. I see some real talent on this team. I believe in Coach P and think as long as he’s given the $$$$ to hire great coaches he will get us back to being competitive and better than people think. I do think the state of Arkansas can give us more players to compete. We have to get all of them or pretty much all of them. The last staff was a joke including the weight staff. I know for a fact that you can develop size and strength and not get out muscled constantly. We have the right coach IMO. And the right AD. Thing is will they spend the money?

I remember in Jan. talking to someone in the program and their eye’s lit up talking about Julius. Their jaw dropped talking about him.