“I love blocking shots. Being able to take something from someone and send it somewhere else is great," Connor Vanover said. 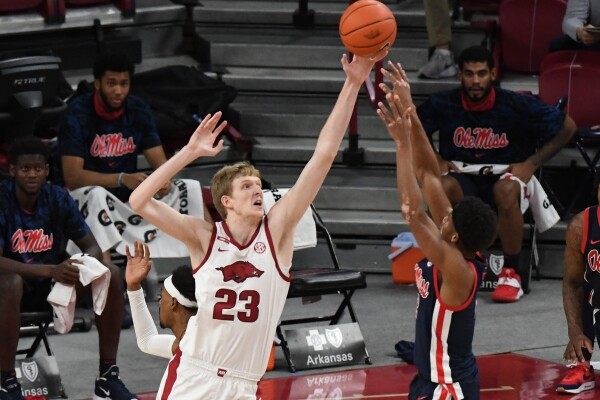 'He was awesome': Vanover plays big on both ends

Eric Musselman knew how many blocked shots Connor Vanover finished with Wednesday against Ole Miss. He was counting on the sideline.

That was really good to see. Would like to see more dunks from Connor and fewer 3 point attempts.

I’ll take the blocks and rebounds from Conner anytime. Any points he scores are just added spice. The blocks play into the minds of opponents trying to score anywhere in the lane & alters shots.

The blocks and rebounds are just part of his contributions. Last night several times OM guys would drive into the lane and kick it back out because of Connor’s presence. Saw that a lot. Big difference maker.

If I coached Vanover, I would tell him never get more than 10 feet from the rim. If I see you near that 3 point line, you are going to ride the pine for a while. You are 7-3. Play defense near the rim…protect it and rebound. It is okay to swat a shot into the stands on occasion, but I want you to do like Bill Russell did. Block the shot softly, then grab it with your hands and pass it to a teammate.

Connor has been shooting the 3 effectively for years, since early in his hs career. He has been in a serious slump, but I think he knows that he will need to shoot the 3 effectively to make a lot of money somewhere playing basketball.

Last night, coach used him in the corners, as part of an effective plan to break up Ole Mrs’ zone, very cool. I’ve never seen that before, but I bet we do going forward, it was so innovative and so effective.

I Connor can shoot the 3 as effectively as he has in hs and at Cal, and he was earlier this year, it will help this team tremendously.

The tempo that Ole Miss plays at is tailor made for Vanover’s talents. I thought this is the game where Vanover can make a good contribution.

Missy contained Moody. There was good tape there for others. Still, my point was I don’t see all the glee.

I mean who needs “glee”, with all the pessimism available?

Considering Vanover just went through a four-game stretch in which he was a minus-31 over 44 possessions, take the positive run. He didn’t have the best +/- but he wasn’t the low man either. If he wasn’t making some kind of an impact he wouldn’t have played his second-most minutes of the entire season.

DaBoar’s comments are da boaring. Some people hate seeing a rainbow after a nice rain. I suspect DaBoar is in that camp. Go Hogs!

Vanover is finally dunking the ball when he is right under the basket rather than laying it up and missing half of those. I would like to see him grab rebounds like shark jaws on a seal. He seems to go after the ball like it’s some fragile thing. His 3 point shooting is part of his game and is apparently an integral part of the game plan. He is still relatively young and developing. It would sure help if he could add some bulk. Is that even possible?

Thanks jere. Just trying to keep it real. Ole Miss bigs are like playing MVSU.

He got up to nearly 250 pounds last summer, then got sick and lost quite a bit of weight. It’s possible.

Ole Miss’ FGM/FGA vs. each Arkansas defender on Wednesday: