On Arkansas' turnover troubles in Nashville

Valuing the basketball was a talking point for Arkansas after both of its games in the SEC Tournament. The Razorbacks matched a season-high with 20 vs. Missouri then had 16 more against LSU – 11 after halftime: 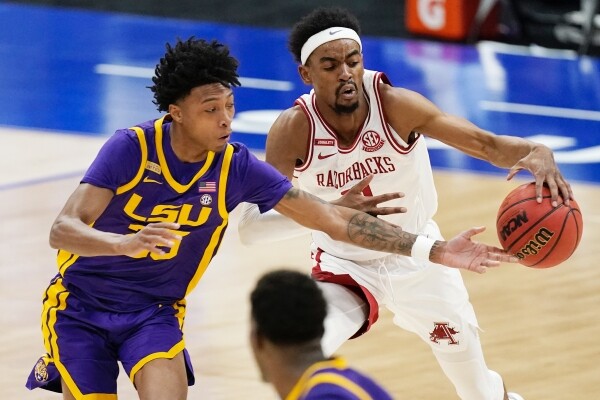 Turnover problems pop up in Hogs' trip to Nashville

Valuing the basketball was a talking point for No. 8 Arkansas after both of its games in this weekend’s SEC Tournament in Nashville, Tenn.

Too much dribbling into traffic and not being aware of what is around them. Just like the stupid passes on traffic that are impossible to make. Also not keeping the ball moving and letting the defense rest and stay locked in on their man. The one On one junk today was hard to watch.

Some of the turnovers were fouls on the defense that weren’t called, but then we got some turnovers from MU and LSU the same way. But there was a lot of just sloppy stuff, losing control of your dribble without being touched, things like that.

Justin Smith’s travel in the open floor was one of the strangest turnovers I can remember.

The last TO was just not paying attention to everything around you!
I’m glad the SEC tourney is over for our hogs and we don’t have to worry about getting in the dance. I wish they would just add 2 conference games to the schedule like the big 10 and forget about the conference tourney!

Yes it was and the missed junk was also real crazy! At the same time I would have liked to see the refs call the same walk on LSU when they would take 3 to 4 steps to get the rim.