On AJ Green's debut + progression at running back

"I look for us to use him more and more each week,” Sam Pittman said.

On Arkansas tailback AJ Green, who had a memorable debut vs. Texas and has progressed well at the position after missing valuable time in fall camp with a concussion: 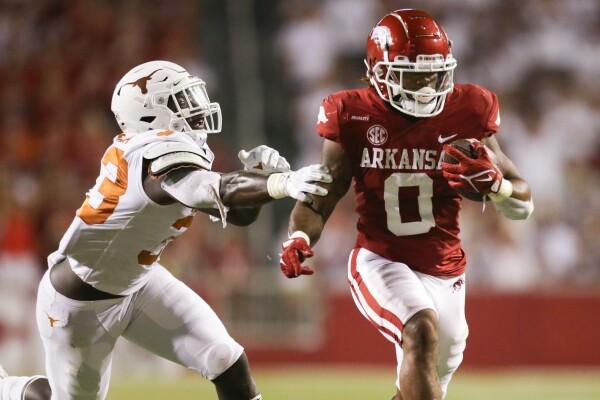 Three days before his team's game against Texas, Arkansas coach Sam Pittman was asked which players could get more playing time than in Week 1.

To me he may have the most potential,he is really fast and stronger than you think and can catch the ball,we have 2 future stars in him and Rocket for sure but I really like AJ and always have.I love Smith as well.They make it much easier on the OL bc you don’t have to create much hole and they are gone!

Green and Hornsby in the same backfield equals headaches for opposing DC. I am close friends with Chris Sanders who was a WR duo (Joey Galloway) for tOSU in a time before liberal pass rules and I have asked and never understood how (2) sub 4.3 guys were stoppable even if it was 1921. Maybe it would take a new and improved split veer or wishbone type attack to utilize Hornsby and Green but my mind wandered there watching Hornsby finish what Green et al. started. I love the progress of KJ, but Hornsby has the highest collegiate upside. Trelon will be holding off Rocket and Green who could be the most dynamic duo if Briles can figure out how to optimize that talent (thank you OL for making all this speculation possible).

I am also pretty excited about Dominique Johnson. Like the other two young guys, he runs very hard every time he touches the ball. He’s quicker in his cuts than you would expect for a guy that big, runs with some vision, and has a little speed, always nice for a power back.

But the absolutely most exciting thing to me about Johnson, as a young RB, is the way he pass protected against Texas. He stepped up and gave KJ time to throw a couple of times when it made a difference. He’s big enough to take on bigger defenders, and he seems to be developing the feel for pass blocking that young backs so often lack.

I remember Johnson lining up to KJ’s right and stepping across to pick up a rusher from the left edge. I’ve seen a lot of pro backs miss that block.

Absolutely love Johnson as well,goes north and south with an attitude and yes not afraid to step up and check a DL…Love this group of RB’s they are VERY good!

That was a smack play, too. The blitzer had a full head of steam and Johnson still absorbed the collision and held ground. It resulted in the 40+ yard completion.

AJ is going to be an absolute stud. Reminds me of a Bama style back.

He is explosive. Quick and fast.