On a previous Poultry visit to RRS

DMac did a little runnin’. 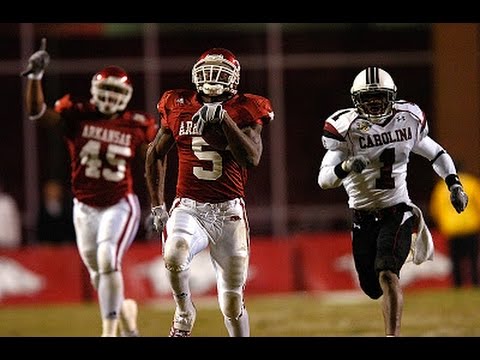 Steve (sad man) Spurrier proved beyond a doubt that he was a small minded, vengeful bu$$hole. Sore loser.

Whisper to Dmac. You ain’t getting my vote.

I was in Columbia when he went off on them!

That was one of the extraordinarily rare times that I left a game early. The game started late (I think 8PM). I was living in Bartlesville and had a dog show in Tulsa on Sunday. I think I showed at 8AM, so I needed to be there by 7. I left early in Q4, so I could get out of the parking lot.

I listened on the radio as RunDMc continued to rack up the yards. He was such a special player.

Thanks for that post! One of my all-time favorite games. It’s was obvious early in the game that we were witnessing football history. Afterwards, there was no big hurry for the fans to leave RRS that night. We just stood around after the game and said, WOW!”

“The Ole Small Coach” was an arrogant, overrated jerk. I understand him voting as a “homer” for Tebow #1 on his Heisman ballot, but voters get to select their top 3 choices. Even after DMac’s remarkable performance against his SC team, Spurrier refused to even include him in his top 3. He was, and still is, a petty jerk.

Beyond a doubt, well said. Arrogant jerk fits him perfectly.

Actually. the last time South Carolina came to DWRRS, they beat us 52-0.

I said A previous visit, not the last visit.

I said A previous visit, not the last visit.

I was waiting on a flight to Gainesville in Charlotte years ago. Visor boy and his wife we’re waiting for the same flight. He was pacing back and forth talking on his cell phone too loud and too long. Annoying for sure. Finally Mrs. spurrier told him in no uncertain terms to sit down and get off the phone. He obeyed immediately. At least he’s that smart.