Live stats on UA website had the score 58-43 at the last media timeout. Scoreline on the video has 54-41. Which is right?

I’m getting a clue. Whitt got the dunk on the feed from Adrio and the live stats credited Jimmy with a 3. That might explain it…

I noticed the same thing, Official box isn’t up at the UA site. If AP had somebody covering from their Little Rock bureau (quite possible) they might be getting their details from the live stats.

The espn app was way off towards the end also, keep changing the score frustrating not knowing the real score

Live stats on UA website had the score 58-43 at the last media timeout. Scoreline on the video has 54-41. Which is right?

SECN+ was running over a 1 minute (game clock) delay. Their score never matched the live stats during the game.

Don’t match them after the game either, Like waaaaaaay off

There was a glitch in the official stat feed that caused players to be given extra points, and the final score to be wrong. I assume AP wrote its original brief off the box score, which was incorrect. The final score was 64-46.

Thank you Matt. I suspected when I saw Whitt was given three points for a dunk that that was where the problem was, but then AP confused me further.

There are the official stats from the game. 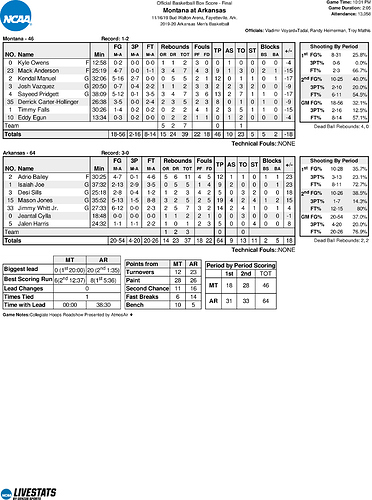 Bruce Pearl is taking notes on a new way to cheat…

Bruce Pearl re writes the new ways to cheat daily!