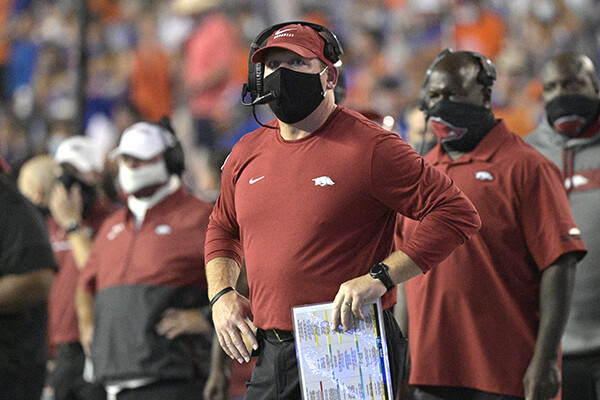 Appreciate the info, it sounds like a couple of them have one year to prove their worth, or so it would read.

Thats how i figured that as well. They have a shot to prove themselves, if they dont succeed then off they go and we dont owe them a buyout

There could potentially be a small buyout in that scenario. The contracts all run through February, so if someone is cut loose in December they would be owed for 2-3 months.

Isn’t Odom thru 2024? Never mind, reread thru the season. 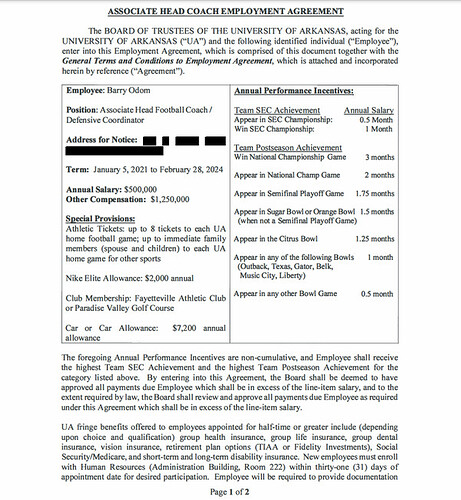 Don’t get me wrong, he deserves every penny and I am glad we could talk him into staying, but are we just saving Missouri money?

It probably already been asked and answered, so sorry, but what was his deal with Missouri when he got fired?

I’ve updated the story with some buyout language. All would be owed the full amount of their contract if they are fired for convenience, subject to mitigation. If they leave for another job they would owe Arkansas 20% of their remaining salary, but that can be waived if they leave for certain promotions.

That was my understanding, too.

Wow, Missouri got off cheap! Again, I think he is worth every penny. I am not objecting!

Is the Cotton Bowl not on par with the Sugar/Orange or at least the Citrus. It some years is not one of the playoff games, right?

The Sugar and Orange bowls have direct affiliations with the SEC when they are not semifinal games. SEC teams that aren’t in the playoff can still play in one of those two bowls. I think that is why it is written into the contract that way.

Based on the current system, I do not think Arkansas can play in the Cotton Bowl again unless it does so as a semifinalist in the playoff. In that event, the semifinal playoff bonus would be triggered.

I guess the Cotton Bowl has improved its prestige as part of the CFP, but to me it has lost its identity. I grew up used to watching SWC, SEC and Big 12 teams play there and it was something I didn’t want to miss in a given year. But a lot of its recent games have been between teams with no regional appeal — Ohio State-USC, Western Michigan-Wisconsin, Notre Dame-Clemson, Penn State-Memphis.

Matt, was Rhoades retained, I’m hearing mixed signals, and Sam didn’t seem to so in his Zoom PC, from what I’ve read.

Yes, Rhoades is still on staff.

Sure like the way the program is stepping up to keep good people, Odom earned this money. Recruits like seeing stability in coaching staffs ! WPS

Reading the article and seeing the mention of our former DC reminded me that when I was in Raleigh NC earlier this week, I drove by John Chavis Memorial Park on the way out of town. This JC was a Black educator and Revolutionary War veteran who opened his first school near the current park site in 1808, and the park is now on the National Register of Historic Places. But it was kind of odd seeing that name on the sign at the entrance to the park. And one of the features of the park is that it contains a half-mile segment of the Little Rock Trail for jogging, biking, etc.