Marreon Jackson wore #3 at Toledo. Desi wore #3. Leaves. If we get Jackson

Interesting how this matches up for the most part, if any of these guys care which number they get.

I don’t think we’re after anyone in the portal who wore #24 (Ethan). Chance Moore wore #25 in high school. And Akol Mawein wears #3 in juco.

I did notice when we signed Mawein the graphics folks did one with him wearing #2, which is Vance Jackson’s number. 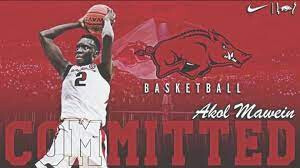 Kamani has already been assigned the #20 he wore at UALR.

Either you have too much time on your hands or you really know how to think out of the box. Very impressive work on your part. It was never on my radar but you were incredibly creative to even think of the players jersey numbers.

I noticed right away when I saw his first highlight video what number Toney wore at Pitt. After seeing that Lykes was #0 that stuck in my mind and I checked on the rest.

And yes, I have too much time on my hands, but the research took about five minutes.

Also, Myreon Jones wore #0 at Penn State. Can’t have two #0s, so that worked itself out.

More numerology (Guy, you should remember this one):

Who was the first Arkansas football player to wear a single digit number?

Speaking of football jerseys, sometimes the available number is important. We had to get #12 out of retirement before JFB could sign Steve Little to kick for us. Fortunately, Clyde Scott was good with that.