Not to beat the "They short change Arkansas" horse too much, but

Was watching a lot of the prognosticators and talking heads from the various SEC and ESPN weekend final shows and when ever the topic of 3rd best team in the SEC came up it was always about 3 teams.

I like being in that conversation and can’t argue with being in the 3rd place group as Bama and Georgia are hands down the best the league has to offer this year. So back to the 3rd best.

It seems the vast majority want to pick Tennessee and almost as many want to pick Kentucky and very few pick Arkansas. Takeo Spicks picked us on SEC Network.

Anyways I was diging through the strength of games played and their projected finish and it all supports Arkansas being #3 Kentucky #4 and Tennessee #5. And if you dig deeper and look at the total out of conference strength of schedule Arkansas blows them away. I guess we just aren’t the darlings that Kentucky and Tennessee are at this point.

Anyways here are the numbers and projections. 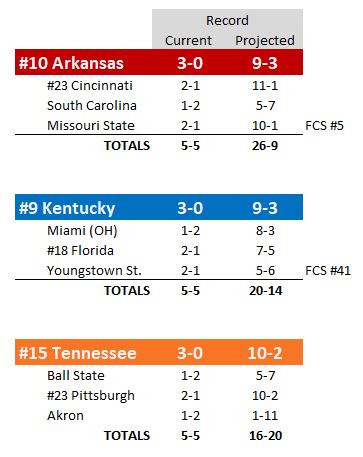 Just gotta keep winning it will take care of its self.

I saw this discussion on SEC Football Final and it sure seemed like they just assigned each talking head a team to tout. Keeps things lively (and fans involved) but obviously premature.

I saw this discussion on SEC Football Final and it sure seemed like they just assigned each talking head a team to tout. Keeps things lively (and fans involved) but obviously premature.

Good point. This probably happens a lot more than we realize. Have to generate some buzz.

I saw Takeo touting a team and the others joking that he had tweeted earlier he wished he didn’t have to do it. Years ago my brother was watching a raw feed of college or pro analysts and during the commercial one of them said he wished he had not been told to predict a certain team would win, he’d look like an idiot.

Obviously it’ll all shake out in the end but I think it actually might be UT this year. I’m sure glad we don’t play them this year. Sad to say that because I’ve really been enjoying us beating them.