Not much of an SEC race

So far. Tennessee is 7-0 despite getting a homer taken away last night at Vandy for using a bat with an expired inspection sticker (seriously). Hogs are 6-1. Everyone else has at least three losses. Georgia is in second in the East at 5-3, A&M is second in the West at 4-3.

And, oh yeah, Arkansas and Tennessee don’t play each other.

The Hogs get Vandy. In 3 weeks at the halfway point of conference play it will give a lot more insight. The hogs go to Florida next week.
Win this series against Miss St and hope for a sweep. I just hope our hogs can maintain the lead in the west and grab a top 8 seed for regionals!

I’m afraid TN is really good. Apparently they’re loaded with top pitchers and their lineup is loaded, too. Their record supports all I’ve read. I hate that because I came to loathe them last year.

Fortunately, we seem to be pretty good again, too. We’re good enough to win it all, but we all know it takes more than that.

I saw that about the bat
I didn’t realize they had inspection stickers
Who does the inspection? Umpires?
Could have used that against Okie State a few years ago.
And who decided to check the bat after the homer?
The ump?
Vandy catcher, coach?

Under the rules, the bat has to have a sticker with the logo of the opposing team, after it is checked to be sure that (a) it is on the approved bat list, (b) it passes a compression test and (c) the barrel size is legal. The bat in question had a sticker, but it was the logo of EOE’s midweek opponent, not Vandy. Tim Corbin said after the game that the Vandy catcher picked up the bat and noticed the incorrect sticker. 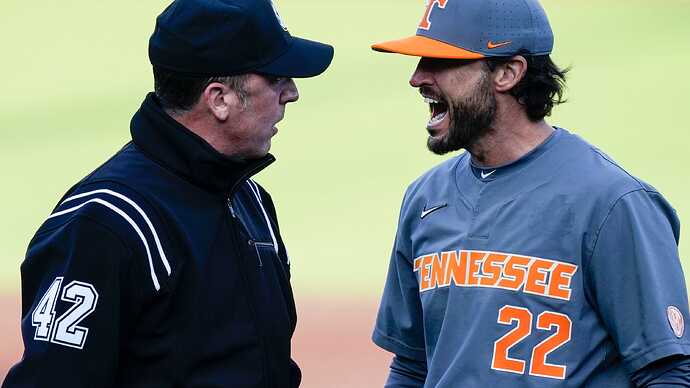 Jordan Beck was called out after hitting a home run for Tennessee in the first inning against Vanderbilt due to his use of an "illegal" bat.

The Tennessee coach’s in-game dugout interview later was a pretty funny little jab at the umps over the expired bat inspection sticker. He said one of his players was there on a forged transcript and was really 35 years old.

The Tennessee coach’s in-game dugout interview later was a pretty funny little jab at the umps over the expired bat inspection sticker.

Tony’s pretty much a jerk. It’s a rule. They violated it. He used an unapproved bat. If you don’t enforce the rules, people will use juiced bats like they did 15 years ago.

Before the series, Chris Lemonis said something along the lines of there are a couple of teams that are head and shoulders above everyone else in the league. He did not say which ones, but I assume he meant Tennessee and either Arkansas or Vanderbilt.

He said the rest are kind of trying to figure themselves out. He put Mississippi State in that group.

I just hope our hogs can maintain the lead in the west and grab a top 8 seed for regionals!

To the extent that RPI plays a role in that, we have some work to do. NCAA has been lazy about updating RPI, but we were 25th on the official list after the midweek games. Slightly better on Warren Nolan’s unofficial list, but Warren’s formula is not very accurate. And Boyd Nation’s list is even worse; we’re 32nd (which tells me his formula is not very accurate either).

SOS is the issue, as usual (since RPI is largely a SOS measurement). We’re only 3-2 against Q1 opponents. Tennessee is 12-1, and their RPI shows it (#2). Granted, playing an SEC schedule will take care of most of that, assuming we continue to play at a West-winning level.

Tennessee is very legit they appear to have no weaknesses but it’s incredibly hard to play as well as they are for the entire year. They don’t seem to miss any pitches, you make a mistake in the zone and are not fouling them off they are barreling up everything. I will be very shocked if they can keep this up the entire year. They’re pitching is a surprise for me they have three power arm starters and a good bullpen with big arms as well but as we saw last year all it takes is one bad weekend and you are through.

He’s had his moments But I did not think it was a real jerky thing to do to poke fun at the umps after his guy got called out for something that was the equivalent of George Brett’s little problem a few decades ago.

It’s an interesting series for coaching tiffs, because the Vandy coach can be a little overbearing at times, too.

It’s an interesting series for coaching tiffs, because the Vandy coach can be a little overbearing at times, too.

Yeah Tony and Corbin both can be major jerks

But one of these years, our weak NC schedule will bite us in the butt on Selection Monday.

our instate opponents hurt our SOS, too. UAPB is awful. 300 RPI per Nolan. UALR,asu and UCA are all above 200. Doubt they improve as the year goes on

our instate opponents hurt our SOS, too.

Yep, but the weak schedule goes beyond the in-state teams…

Noticed last night the barrel of some State bats looked very rough. Looked like the bats had been used to drive nails or chop fire wood. Hard to believe the surface of the bat barrel is not checked.

I can’t stand Corbin! Guy seems like such a butt. Vitello rubbed me the wrong way with that little confrontation last year and I don’t like the way he lets his players act like a bunch of wild idiots during the games. They have a great team no doubt about that but like I said it’s tough to keep that level of play up for an entire season. I would rather peak at the end then at the beginning

I’ve always liked Tony Vitello. He is a fierce competitor. I believe Dave and Tony are over the stuff that happened last year. I am, too.

You could say “act like you’ve been there before”

Alabama came back to beat A&M 10-9 and now everybody in the West has at least 4 losses except the Hogs.

Meanwhile Tennessee hung up 3 in the top of the first at Vandy.