No Matter who our OC Is

Some do not want Applewhite because he played for Texas.

Some do not want Briles because he is associated with Baylor.

Some do not want Long because he is too much of a hard case.

Some do not want Lashlee because he worked for Malzahn.

Some number of our fans will have a problem with whoever our new OC is. The question for them will be if the hiring of a new OC is a sword they will fall on, as in, “Oh, we hired ____? Well, I cannot support that. I’m done with Razorback football.”

I trust Sam to get us the right man, and whoever it is will be a Razorback the day he is hired. I’m going to support him.

I want this guy, but the barbers will all be upset. 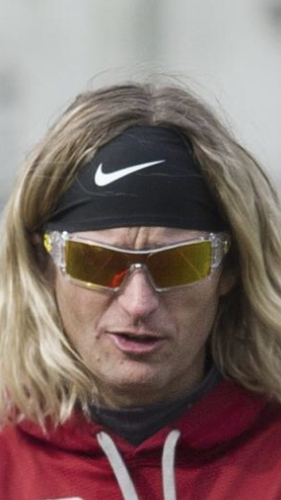 It all comes down to who does Pittman feel most comfortable with. Who can recruit and develop players, especially qbs. And who will best represent the program and university.

Sad but true, and just illustrates the divisions in our fan base, which go back at least to Nutt and probably to Hatfield.

The OC qualifications are like a Venn diagram of meshing with the philosophy of and getting along with the head coach, recruiting and retaining players, and on-field performance. Each factor is important. If any one is grossly deficient the others will suffer. If all are superior who cares where he played. Some may add character questions, but those would obviously go with philosophy of the head coach.

Whoever, CSP hires is good enough for me.

Yost is the real deal. He’s seen/coached a couple different styles of offense, too. I’d also be fine with Rob Sale (Napier’s OC at Louisiana) and Matt Kubik down at ULM. Both offenses are among tops in the nation. ULM also put up massive numbers against FSU, Memphis, and Iowa State with vastly inferior talent. Worth a look.

Speculation is fun, but It really doesn’t matter if any of us like the hire or not.

Only Sam Pittman gets a vote and that’s that.

Right you are Mr Dudley … Sam is the man who has got to make it work. I do wonder if he has the final say on those with perceived baggage. I would hope that whoever he wants he gets. So far he has made some terrific hires and I expect he will get this one right as well.

I was just reading an NFL article talking about coaching hires and how new ideas percolate through all levels of football, and it mentioned Oklahoma State. Mike Gundy’s last two OCs at Okie Lite have come from Shippensburg (Pa.) and Princeton, The guy from Shippensburg (which is D-II) got poached by Ohio State last year, and they have the nation’s leading rusher this year (who happens to be Canadian). Power 5/FBS experience not required.

In the end, all any of us want is CSP to be successful. I don’t care
ultimately where the OC went to school or what route he takes to get here. Razorback football being relevant in the top twenty-five year after year is where we need to be.

Which, is the most ridiculous reason to not want a coach, I think I’ve ever seen

Which, is the most ridiculous reason to not want a coach, I think I’ve ever seen

I’ll agree with you there.

Bo Schembechler was an assistant to Woody Hayes at Ohio State. Twice.

any one of the 4 originally mentioned is better than I expected to be interested (hopefully) and available. Same as Pittman, all the board will never be happy and have a condemnation to spare and share. I will take any of the 4 and let it settle in for recruits to digest.

While we’re still living in a nation governed by laws and one of those laws being Freedom Of Speech I think no, I KNOW IT’S MY RIGHT to suggest, bicker complain or do whatever I choose to do as long as its within the rules and guidelines of any certain organization. CSP is the man and I’ll back him 150% and I still don’t like MA as OC regardless of where he went to school W P S

I assure that going to school in Texas would not be an issue. The reverse might be a factor where they might favor a former Razorback but my guess is that having a recruiting background in Texas is a plus and not a negative.

Bottom line guys … Life goes on.
If AR can only hire coaches who have played or coached here in some minor capacity in the past, then we ARE in deep trouble and WILL be for years to come. If someone was great years ago and played at Texas or OK or Miami or Alabama, so be it! Good for him. Those “other school” players or coaches want to better themselves and if any come to AR, that is OK with me… shows that they turned someone or someplace else down for a job and went with AR, hoping to restore a great team in the past to a very good-excellent team in the future. Life’s job placements and advancements happen with ALL of us, no matter what state we are from or what team we supported years ago or even played for.

Kids grow up, and coaches gradually get better (well, most do) but it takes time and the RIGHT situation. I personally think Pittman and Arkansas offer that to many qualified coaches. Same feelings towards some players who will commit to us in the upcoming weeks… Many will go from a 3 Star to a 4 Star type player in a short time with the right coaches. Pittman is the beginning of something special I do believe.

What other schools are looking for OC’s? Lot of turnover in NFL coming.