No go on Fritz

I think fritz would be a disastrous hire 21-24 overall as a coach and not a terribly strong recruiter (based on what Tulane could do) I think he’s a Morris 2.0

Don’t think he will be on the short list.

I definitely agree, but there are many on this board swearing by him

Don’t think Yurachek is going to make his decision based on this board. Hire a guy from Tulane to replace a guy from SMU? Don’t think that’s happening.

Nah I’d pass on a man who has won national championships at d2 and I-aa levels. Then went to Georgia southern and put on a show in sun belt then has rebuilt Tulane. Man has only contacts in Missouri, Texas, Louisiana and Georgia. Several of his coaches are very familiar with Arkansas from Steve Roberts time at asu.

While he might not be my choice, might wanna check that he ain’t qualified a bit. The man can flat out ball.

Tulane has had 8 winning seasons since 1985, two of those seasons have been under Fritz. He has a 68% win percentage in over 25 years as a college head coach with only 4 losing seasons, two which were during his first two seasons at Tulane. He has won at literally every level of college football except for P5. He has won two national championships at the JC level, played in back to back national championships while at Sam Houston State. He has coached in Missouri, Texas, Georgia, and Louisiana all within Arkansas recruiting footprint.

Fritz is almost 60 yrs. old. No offense to the older guys, including myself, but would prefer a younger coach who is in his 40s or early 50s. That is in part why I prefer Norvell or Dirkwitz (with a few more years of experience) or Lunney (with HC experience). Broyles was only 34 when he came to Arkansas in 1958.

Yes he is. As Dudley said earlier this is a rebuild of a rebuild.

I liken this to a house flipper. Watched a show or two and thinks they can do it. Flip one or two without a total complete remodel with easy work hot areas and then with great bravado goes and buys a big flip. After complete Demo the start of construction owner realizes he is out of money/in over his head and sells to the veteran who tears out everything and starts all over. This takes more time and money.

The new coach has to restart the rebuild. Looks like at least a 5-6 year process regardless whomever is new hire

So you are only counting his four years at Tulane…which was a total rebuild when he got there and now they are in the running for their conference championship? His actual collegiate coaching record is 176-93. 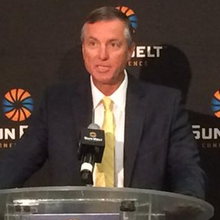 Just like we all give Musselman credit for his years in the D league, to appreciate Fritz you gotta look at what he did at Central Missouri AND Sam Houston AND Georgia Southern AND Tulane.

To compare him to Chad Morris, who has only won at the high school level…NEVER at the collegiate level, is an insult to Fritz.

I think he would be a great hire.

Fellas I’m sorry but D2 football and d1 AA is just so much different from the SEC west. I could sit here and give an argument for why chad should’ve made it here but he didn’t. Personally, I think it’s risky at best to seek out anyone not in the power five realm. IMO we need a guy that knows this landscape of recruiting/week in and week out competition etc.

Will Muschamp will be available soon, you would probably like him even though he has failed at two SEC schools. He sure knows this conference though!

Fritz is more likely to be here for the long haul than an up and comer. Why, because of his age. A young coach will leave as soon as a better job is offered. Besides with the talent we have, the transfer portal, and grad transfers it should not take 5 or 6 years to be competitive in the SEC.

Don’t see where rebuilding Tulane could remotely compare to the 4th rebuild attempt at AR in the last 9 years.

Fritz is good coach, no idea if he is man or not to be the Ark coach. Or even if he would be interested. But to question of his age, you might want to check when Saban took over Bama.

He has rebuilt 3 schools (Central MIssouri, Sam Houston, and Tulane) and transitioned GA Southern from FCS to FBS going undefeated (9-0) in conference play. That is with 63 scholarship players against teams of 85.

Frank Solich started coaching at Ohio when he was 60 and has been there 15 years now. Mack Brown is 67 in his first year at UNC. Herm Edwards is 64 at Arizona State.

bet Nebraska would like to have Solich back those years

I wouldn’t dismiss Fritz out of hand as the second coming of Morris–he might be, but we have no way of knowing that for sure. It’s the same thing as those saying CBLJ being considered for permanent status is insane. Probably he’s not ready yet, but he could well overachieve if given the chance. There are so many positives with Barry, including keeping a sense of humor even through adversity, that in my book justifies at least consideration.

I think Fritz is a strong candidate. It is impressive to me that he’s built teams to a high level wherever he’s been. Yes, the main knock is that he has no P5 experience, not SEC, which I really prefer, but I won’t dismiss him because of that. I want someone who will do something with our defense and he’s a former DB. I also want someone to concentrate on building the line on both sides of the ball, so his past success indicates to me that he could do that. I just don’t know how good of a recruiter he is.

Again, I’m not dismissing his lack of SEC experience. That’s big. My opinion it’s the been the downfall of the last two coaches. That being said, after having watched a post game presser of his, I get a vibe similar to CCM–in that if he got into the SEC he could be in over his head and players might take the blame. So I don’t know if he would work out or not. Maybe he is too big of a gamble.

Uhh… you got me?? Nope mushchamp would be terrible