No discussion of OBJ cash handshakes?

That was pretty brazen and could lead to a severe tongue lashing from the NCAA.

What are you talking about eagle?

NCAA and SEC are ahem “investigating”

I saw a video on Facebook yesterday of Odell Beckham Jr.pressing cabbage into the hands of several LSU players after the NCG. Supposedly all of the cash receiving players were seniors or guys leaving for the NFL.

Not all the players getting cash were leaving. And Joe Burrow confirmed it was real cash. OBJ has demonstrated before he’s not interested in following the rules. LSU may have to disassociate him.

I’ll agree that LSU will most likely have to disassociate OBJ. Handing out cash on the field in front of people is just plain stupid.

Expect this to go away rather quickly. Nothing will come of it. LSU may not be Blue Blood, but they are too big to fail.

no discussion because OB is a very immature dude, behaves like an idiot all the time.

and the NCAA will do NOTHING about him blatantly passing out cash to LSU players, on national tv.

Heck, they allow Arizona and LSU and Auburn basketball to exist. UNC. Miami.

so complaining about blatant violations is just wasting time.

Holden is right. This is not even going to make a ripple with the NCAA. They just don’t care anymore.
LSU has always been a cesspool. Has the NCAA ever been down that far South? I don’t think they want to go there.

OBJ just carrying on the same tradition that got him to LSU… got to respect that.

Perhaps every team should openly hand out cash to the players after wins & expect the same hand slap & meaningless reprimand that the NCAA will give LSU. If NCAA chooses to impose penalties or sanctions on other teams for doing the same, just point out this precedent set by LSU.

Time for the NCAA to go away & a new non-biased, non-political, & relevant organization replace it. Their years of favoritism to certain teams with political & financial clout, including biased refereeing, has been going on for too long.

I’ll agree that LSU will most likely have to disassociate OBJ. Handing out cash on the field in front of people is just plain stupid.

Truly amazing he would do that to the kids. Beyond dumb.

lsu is not bigger than bama and bama took a nose-dive about 20 years ago. Not saying they will or won’t but anything is possible.

holden &jhawg you both have very valid , true arguments but allow your fav university to step outside their hypocritical laws of justice just a little bit and B U S T E D

And there is this 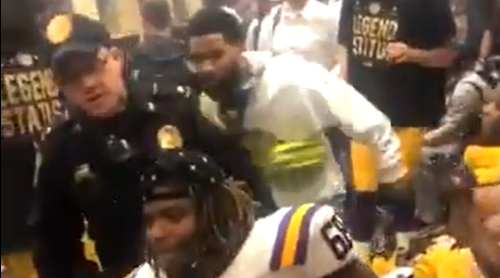 Odell is going to have to face some serious penalties. Like running down Bourbon Street with fans screaming at him (in support). I figure that’s about the extent of this. Just keep moving. Nothing to see here.

Arrogant and entitled young athlete demonstrating
disgusting and stupid behavior. You are right, Clay,
nothing out of the ordinary. Might as well just move on.