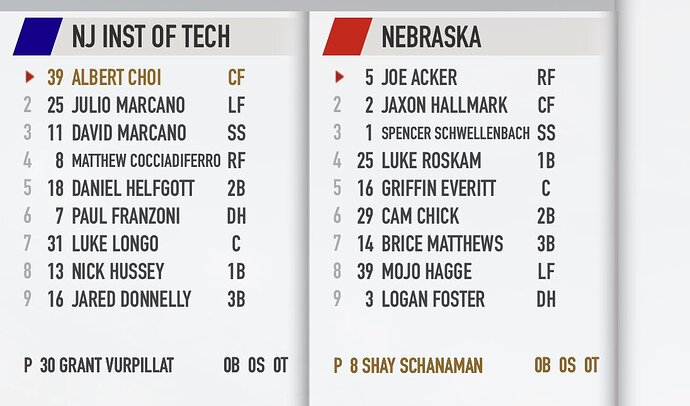 I wondered if they’d throw Vurpillat against us but I guess they have to get to us first. And he gives up a 400-foot triple to dead center right off the bat.

2-1 Neb. in the 4th NJIT just hit a bomb to RF,can tell the ball is flying much better today!

Huskers leadoff man has a triple and a homer. He’s got the hard part of the cycle already, which would be the second cycle of the year at BWS.

6-1 and theatening for Neb in 4th, La Tech putting runs on Tide in Ruston. If we hold form then I expect ACC to come to Fayetteville in the form of NCST.

Huskers have broken it open in the 4th up 10-1,They are killing the ball in this inn.inside the park 3 run Hr and another off the wall in RF…8 runs .They will be all jacked up now,We need to jump on them early!!

Too bad. I hoped that at least NJIT would stress Neb. Now I’m afraid buskers can coast. Don’t have to use their better pitchers. Maybe it can close up a bit and scare Nebraska

Why isn’t any of Arkansas game’s on TV they are the #1 team in the Nation . You would think that TV or SEC would want to show the Fayetteville regional . Do the sports media hate Arkansas that much .

I really think they just Assume we will win this Regional and will be own all next wekend, and have shown us several times already but JMO

Anybody know if this game is on radio in Rogers???

I hate that Neb can keep from using their better pitchers today—at least after their starter. No need to use their BP at all.

Thats true but our Staff is still in better shape than theirs,just need to jump them early so they realize why we #1.
We don’t need to let them to ride this offensive confidence right into our game and get behind early.

Cut the head off the snake early and put them out of their misery! Beat them into submission. Score early and often.
I just hope there’s no weather delay that messes up the pitching.