All of their starters are righties. Ryan Fischer has their best ERA at 2.77 with a 4-3 record.

Maybe a time for the Hogs to get considerably closer to our home run record.

Marcano is a senior left fielder from Katy, Texas. I guess that tells you what college baseball has become; everybody recruits nationally. His twin brother is also on the team.

Their conference tournament final was canceled due to weather and NJIT got the bid due to being the only unbeaten team in the tournament. They walked off Maine in the semifinal with two unearned runs in the ninth.

They set a program record with 26 wins and come to BWS on a nine-game winning streak. If they do throw Fischer against us, he allowed 4 dingers in 74 innings. Fischer got the start Friday in the 2-1 win over Maine. 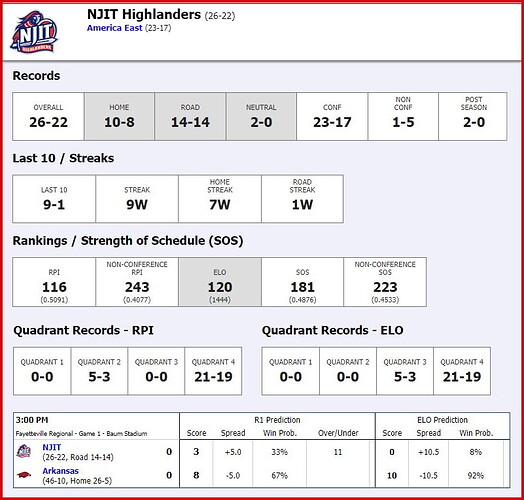 I’d take 8-3 with Kopps remaining on his dugout seat.

Me too, though my big decision is trying to figure out to which side to bet on the over/under. ELO has be the more accurate predictor over RPI throughout the year.

Northeastern is projected to beat Nebraska in game 2, BTW.

Somehow I’m thinking we might hit double figures on our own Friday, against a righty.

We just have to play and not think about the opponent,We are the only ones that can keep us from winning the Regional,We have played so many great teams,almost impossible to come out with the same intensity,we need to jump on them early and not get off to a slow start like we have many times with inferior opponents.

NE has very good pitching playing the teams they have played,not someone to take lightly

NJIT has won nine straight games. Arkansas has won eight in a row, albeit against very different competition.

NJIT has won nine straight games. Arkansas has won eight in a row, albeit against very different competition.

Yep. I mentioned it because they’re probably a better team, or at least hotter, than a 26-22 mark suggests. Clearly we should be able to handle them. Going by RPI, if it has any value this year, the closest teams to them on our schedule were Murray State and Auburn. Their only nonconference games were roadies at VMI (lost two of three) and Fordham (swept), but those were the first six games of the season.

they will very motivated to play us with nothing really to lose,We need to come on strong early and not give them any hope,but we have not been scoring much early lately

Agreed - jump on them quickly and don’t look back. Set the tone for the rest of the weekend games!

Agreed - jump on them quickly and don’t look back.

I’d rather not do what we tend to do, which is wait until the second time through the order to start doing damage. I’d rather do what we did in game one at Stankvomit – hit three homers in the first inning. 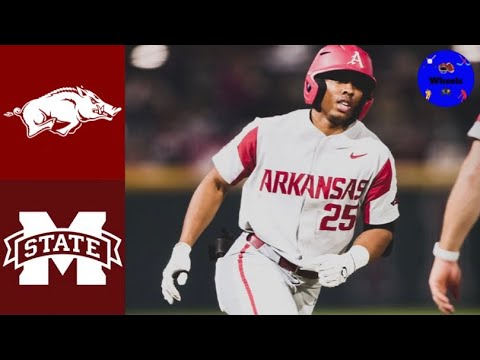 That is exactly what we need to do but we are normally very passive at the plate early,I want us to come out swinging the way we did that night and maybe hit a couple out to get the crowd into,the longer they have hope the more nervous it can get,we have everything to lose and they can come out Loosey Goosey and just play.I hate playing team like this especially with all the great teams we have played.

All of their starters are righties.

Their starter in the first conference tournament game was Tyler Stafflinger, senior RHP (6-5. 3.77 ERA). Fischer started the second game. Their league series were 4 games; the last league series, Grant Vurpillat (LHP, 1-5 record, 5.96 ERA) started game 3 and didn’t get out of the third, but they rallied against the UMBC bullpen and won 13-6 after scoring 8 in the sixth inning of a 7-inning game (doubleheader). Jared Kacso (RHP, 2-3, 6.79 ERA) started the second game of that doubleheader. I’ll take my chances against a leftie with a 1-5 record and ERA of 6, if they want to throw him. I’m guessing they’ll throw Stafflinger or Fischer.

America East ain’t a great league. But I also remember Stony Brook went into Baton Rouge and won a super in 2012, advancing to Omaha. So don’t take them lightly. However, that Stony Brook team finished 52-13. NJIT has a few less wins than that.

Yeah I remember Stony Brook. They had a solid team.