NIL and how to buy players

Here is a little piece of an article I’ve pasted below. Let it sink in as you read the article.

“And while you can quibble with Saban’s descriptor of Young’s endorsement deals (approx $900,000 in 3 weeks), you can’t argue with why he’s bragging about it. Texas is a huge recruiting ground for SEC schools. Spreading the word about the potential earning power at Alabama to top Texas coaches who will turn around and tell their best players what Saban said is a powerful recruiting tool.”

Pandora has opened her box and its going to be a plague that just covers up cheating. How can the NCAA ever enforce cheating rules now? This will kill the NCAA as an organization and I expect that a new group of the Power Elite to form. I hope the Hogs can make the cut.

Here is the article: 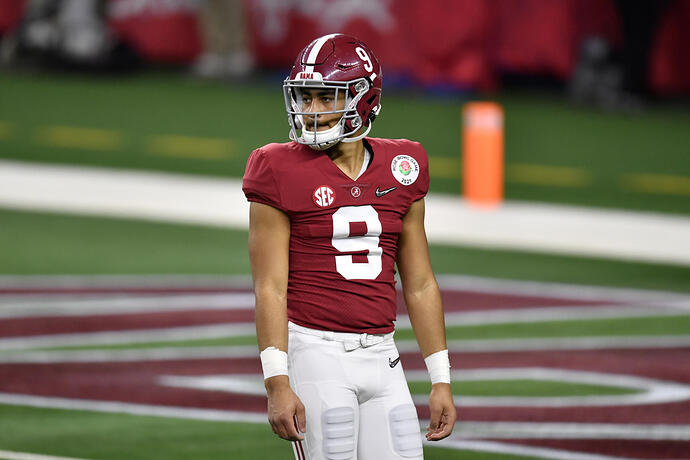 Being QB No. 1 at Alabama has its advantages, even if you haven't started a game yet.

College football is now some sort of semi-pro football. I think the bloom is off the rose, at this point. We all know this is just a way to pay players to come to your school. I can’t wait to see what these Auburn and LSU guys are going to get. Payola at its finest.

Looks like the light at the end of the tunnel may be a train coming at some semblance of a level playing field. I know it was never level, but this could be crazy. I suspect that it will correct itself over time, but very possibly at the expense of the future athletes. I am sure that I will be corrected by our resident experts, but at this point who knows. I know I have my fears, but I also know that I have just one perspective that time will either confirm or dismiss.

I have been accused of being an old goat who does not understand the real world.

However, I foresee the end of what I knew as collegiate sports. It is now business and soon to be big business. I hope I am wrong but money usually defeats principle.

It is now business and soon to be big business.

That happened decades ago

That happened decades ago

True, but there is a difference. The “Haves” (formerly known as the cheaters) tried to keep the money on the “down low”. Now they can flaunt it, advertise it, and get main stream media to print articles about it. It will just make recruiting easier for them.

Now, Arkansas has to make sure they jump in the middle of this and become a “Have”. It breaks no rules so it’s time to jump on that NIL train.

Bingo. Excuse making is over

Seems it always easy to spend somebody else’s money. I know that I will not be writing big checks, so I am not so easily comfortable in a world of money grabs.

Seems it always easy to spend somebody else’s money. I know that I will not be writing big checks, so I am not so easily comfortable in a world of money grabs.

Well then it’s a good thing nobody is offering you money.

Why can’t we have just one of the Walton billionaires care passionately about Razorback football?

They make enough $$ in interest in a single day to fund a Hell of an NIL program on an annual basis.

Whole thing is ridiculous, the kid is yet to even start a game. I wonder about team chemistry being a problem throughout all of this. Guy starts making a lot of money and playing like crap not going to sit too well in the locker room.

In many cases, the backup QB is the most popular player in the team. Will there be times when the backup will be making more money than the starting QB?

Can you imagine how much money the fabulous “Springdale 5” would have made right out of high school?

Exactly Billy. These big ole linemen have given their heart and soul for the team in the middle of the rough stuff. Then a dude walks in with a cool million in his pocket before he takes a hit.

Could be a problem. Key word could. Another unknown.

This will kill the NCAA as an organization

NCAA has already done that to themself.

What happens when the big money makers at the beginning of the season are huge dudes by game 3 or 4? It’s going to add a additional layer of pressure. This happens consistently in college football. Especially for guys out of high school who have never started a college game.

We have entered the era of institutionalized S.A.O.'s.

So now, our local coaches can make a “strong ass offer” of endorsements from sponsors and not be in trouble.

Guess I missed your point, probably no worse than you missed mine. To compete with the big boys may take a lot of money, money that many are happy to see someone else give. I don’t automatically assume that the money will flow in numbers sufficient to keep up with the Tide, the Aggies and such. Since that is direction it seems we are headed, I hope it does.

Business as usual for the Tide, can be open about it now. Just fanangle the money route to fit the premise.
Of course Kirby Smart says it won’t change college football dynamics. He been paying players for hot minute to.
The NCAA don’t care what happens now. Their gonna get a piece of the pie money anyway. Any pending investigations from that FBI wire tap are most likely out the window to. Anything previous that involved money or payments pretty much squashed. Only the sex scandals and other criminal incidents might still be investigated.

Saban just jumped ahead of everyone for next years 5* recruits. In one statement.