Per an announcement from him a couple of minutes ago, he has decided to leave the program.

Best of luck to the young man. 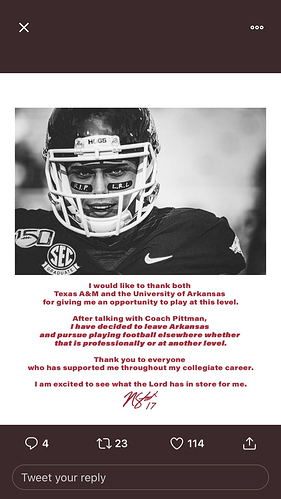 He chose us over other programs. I’m grateful for that. Best of luck, Nick. I never doubted that you worked hard.

Wish he had better coaches and opportunities to grow. He chose to be a big, and I never want to see anyone regret it. Best wishes to the kid with a cannon for an arm

Wow! It’s a must we bring in a transfer now for sure…

Starkel - Good, expected news. We will be getting some good portal, experienced QBs wanting to come here now. GREAT news on Odom getting here on such short notice. He will make less $$ than as HC at Missouri but at least a job better than as Memphis HC he could have had. I suspect he would be in line for HC here should Pittman decided to leave after 3-4 years. The coaching circle keeps turning in every direction this last in the year. That’s college football for you…
Overall, still great feeling about getting some good players to stay and another group who now want to come here and others going to the portal system to transfer here… Good news…

Remember another great coach we got from Missouri? It was J. Frank Broyles.