From today and the Peach Jam

He’s visited Alabama, Auburn, Georgetown and Kansas and has visits set to Arkansas (Set. 9-11) and Oklahoma (Sept. 16-18) and is setting up one to North Carolina.

NOTE: An NCAA rule change in Spring 2020 allows prospects to take five official visits from Aug. 1 to July 31 of their junior year and five additional ones from August 1 to Oct. 14 of their senior season. 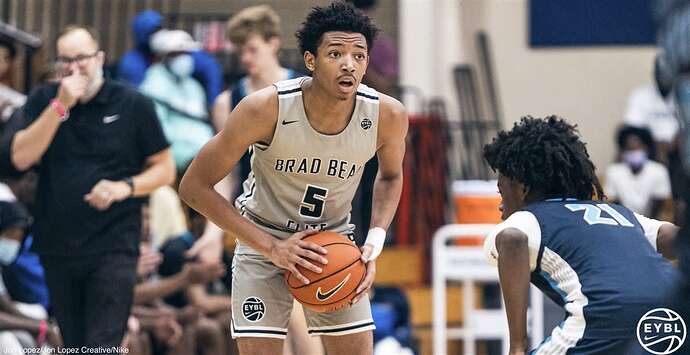 You mean good luck at Kentucky, becuz that’s where Smith is most likely heading.

But he’s not planning to visit Kentucky right now so that’s interesting, huh?

I wouldn’t speculate where Smith ends up! The NIL has changed the landscape and Cal doesn’t have the bag man covering under the table anymore. I just hope the young man makes the right choice for himself! Despite the fact I would like him to become a Hog!

“So you’re telling me there’s a chance?”

I’ll stick to my guns and say Nick ends up in Lexington. If I’m wrong, I’ll come back on this board and gladly admit I was wrong. Actually, I sincerely hope I’m wrong and he commits to Arkansas, becuz holy moly, has he sure been impressive in summer ball.

Again, he may indeed end up at Kentucky.

But I’m just saying that you would think he would at least take an unofficial or official visit there if he was.

And according to various interviews, he has not acknowledged that he plans to do that.

I’m going to be the contrarian here. Although I’m not predicting it, I think the chances of us getting both Ware and Smith are a lot better than many think.

I believe we have a very good shot at Ware.

Smith, opposite end of the spectrum. Don’t know where he ends up, but I just don’t see it being in Fayetteville

We will see. Again, as I said, I’m not predicting he goes to UA. But, the success of Muss, his NBA connections, Moses Moody’s success, and the reality of UA to better meet his NBA goals over the past 12 months have helped tremendously. I’m just saying he looks at UA differently than he did a year ago.

I agree with that

Now you’re talking about Ware here in your post, and not Smith, correct? Just so I understand. If it’s Ware, then I agree, Arkansas has a decent shot. Not ready to say with 100% certainty he’ll commit to Arkansas though.

Nick leaves the state imo, most likely to UK is my prediction.

I just threw up Senor Dawson!

I think we have a better shot at both than most think. UK only offered Smith today. If he is as definitive for UK as many think, he should commit there in the next few days. Would be no need to visit. If he visits us in the fall then I think our chances are even better.

I think we have a solid shot at Ware.

See when he plans to visit. I suspect he never set it up because he didn’t have an offer. However I’d think he should have it set up in the next few days now.