Forgot to drop the link here earlier. What Eric Musselman had to say about Nick Smith’s injured left index finger: 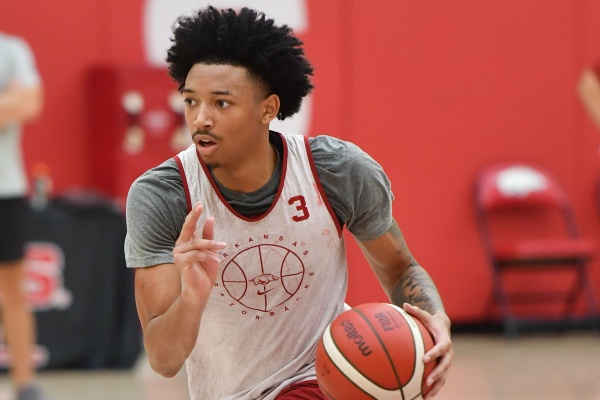 Smith day-to-day ahead of foreign tour

Arkansas freshman Nick Smith's availability for an upcoming foreign tour is up in the air after he suffered a finger injury Monday.

Dang must be pretty significant injury, although it’s one of the finger injuries that can linger on & re-injure easily.

I’ve had jammed fingers in basketball and thumb in baseball and they are a pain.You can handle it, but it becomes a pain management issue. One awkward catch and it hurts like hell as you re-injure it.

Birds finger looked mangled most all of his career.

Birds finger looked mangled most all of his career.

It was mangled. As I recall, he hurt it playing softball, trying to catch a line drive. Bent at a 45 degree angle toward his thumb. He learned to adjust pretty quickly.

Did not sound significant to me either. Exercising good caution is what it appears to me. Certainly don’t want to make things worse and it become a real issue down the line. And like I wrote in the story above, the finger hasn’t kept Nick from working out.

I understand Nick won’t see any action in the Europe games. They want to be extra cautious and have him heal this completely.

Then, it’s more than a day to day thing