Sold his old one and bought a bigger one. 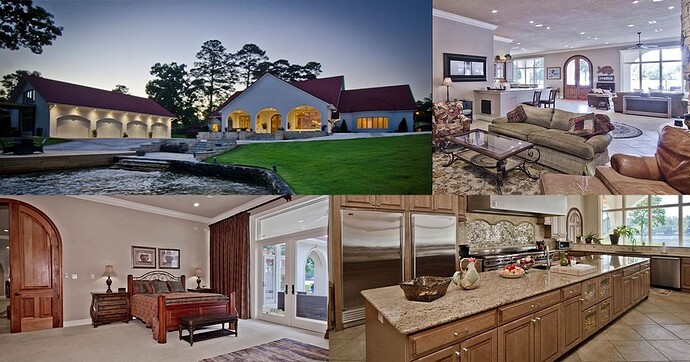 Yeah, reported elsewhere a week ago, a little far to host players in the summer. I hope he gets to enjoy it.

I guess if you’re making $3M with no kids you can afford a palace on the lake.

That marlin is what I remember most from my first time on Lake Hamilton. It’s huge.

Must be nice!! Good for Sam he deserves it…

Yep. Right on main lake, where Little Mazarn dumps in as I recall.

I think Sam likes the track. Don’t blame him.

upgraded part of the lake, even though I went to Lake Hamilton High it will always be the dirty lake to me having grown up on Ouachita. Living in mid TN has changed that perspective and both Hamilton and Catherine would be stars in and around Nashville. Here is Sams house if you had wanted to rent it:

Here is Sams house if you had wanted to rent it:

The last photo is a little cheekie.

Yes, all of Marion Anderson is bisected or headed to both Mazarns. Only nicer water flowing thru the lake is the actual river below Blakely dam. Lots of thoro bred types on that part of the lake, mostly horse owners but a couple of trainers. I doubt Sam keeps it on the rental opportunity market, kinda risky given his fanbase but maybe. Saban and several other coaches are on Lake Smith which is also a wonderful lake in Bama. Sam is living near several good brushpiles.

As much as CSP enjoys NWA, Ozarks, & UofA, surprised he did not find something closer on Beaver Lake. He could more easily enjoy his private time closer to campus & his Fayetteville home & entertain friends/recruits on the lake during non football weekends.

Matt, I have very sad news-that storm a couple weeks ago is rumored to have knocked over the Marlin. I won’t be back on Hamilton for 10 days, but I’ll provide a live report then. all kidding aside, it really made me sad to hear that, and very much hope the rumor is wrong.

The last photo is a little cheekie.

What’s thong with that?

I have heard Sam has a place on Beaver too. Lake Hamilton is his retirement place.

Yes Hot Springs gives him Oaklawn, which is another one of his passions

In the early 60s, my dad bought a small cinder block cabin on the Little Mazarn on Lake Hamilton and an old Duracraft fishing boat from someone on Fair Park Blvd.

I went with him to pickup the boat. I remember him pointing out Orville Henry’s house. I have no idea how he knew that or if they knew one another, but even at 10 yes old I knew who Orville Henry was.

Later I dated a girl who lived on Fair Park. On our first date she pointed out Orville Henry’s house. She didn’t even like sports but Orville Henry was like a celebrity to all of us.

Clay and I went to Central together but we have never met before. I was a math nerd.

It’s not a rumor. The Marlin at Sam’s “Marlin House” was knocked down a couple of weeks ago in a severe thunderstorm

A previous owner of the house was a deep sea (Blue Marlin) fishing guide. Maybe it’s time to replace the fish with a Hog.

I have a buddy who retired on the Lake. We’ve passed the Marlin house many times in the past on his boat. I’ll ask him to cruise by and take photos (he was a professional photographer)