Next challenge for Muss to make Arkansas a blueblood

Most of us also share your “homeritis”, Jeremy……. but fans of Kentucky, North Carolina, and Duke are probably saying the same thing.

Well their wrong this time. Maybe,

Pigfoot, I agree with you. I watch Calipari (who is a good coach no matter what many believe) bring in Top 5 classes on a yearly basis and they don’t win nattys. As good as Coach K, and Tom Izzo are, I’ve seen them have classes that failed to bring home the “gold.” I like Muss, I believe he is a great coach, but so far we haven’t made it to a FF, let alone a title. If we get bounced this year, will people’s opinion of Muss change? Mike never got us to the second weekend, now Muss has, the question becomes can he get us to the third?

Wonder how many P5 teams would take our record the last couple of years?

I think more regular season success is needed. We haven’t won an SEC title or tournament, and it’s easy to dismiss a tournament run as just getting hot at the right time. Nobody thought George Mason was elite after they got to the Final Four in 2006, or Butler making two straight NCGs (they were an 8 seed the second year). We need to play better in January and February, then back it up in March.

What worries me the most about this year is the Euro trip and the Maui Invitational. In my opinion the worst thing for us is to go 7-0 in those seven games. Expectations are already high (see Jeremy’s bet), and that would put them through the roof. We would get everyone’s best shot, I think if we lose one or two of those games, expectations lower a little, and a FF run (or better) would be a little easier because we may not be getting everyone’s best shot night after night. Give a brand new team (11 new players) a chance to grow and learn with mistakes. To much pressure may have a bad affect.

I don’t really care about the Euro trip. The practice is good for us, the comp is iffy. What we do or don’t do in Spain and Italy ain’t gonna matter in Maui, or in Tuscaloosa or Lexington for that matter. We also have two weeks worth of real games before we play Louisville out there; that’s likely to be at least four games.

The rule differences make the Euro trip even less important. Not quite the same game (shorter shot clock, you can knock the ball off the rim, FTs on the fourth foul, etc.).

I’ve never been a “loss is a good thing” type of guy. Let’s face it, expectations are high for this team regardless of how Maui (and Europe) plays out. Also, the pressure and expectations that this staff puts on the players far exceeds any of ours anyway.

Coach is a perfectionist who is meticulous at preparing a team. Not just for the short term (a game) but the long term (a season). Win or lose in Maui and through the roof or tempered fans’ expectations along the way, this team will be prepared and positioned for a Tournament run when mid March arrives.

Besides, as good as we may be, it’s not like we are head and shoulders better than everyone else. There are at least 3 or 4 other teams this year who will have expectations (from their own fans and from national pundits) higher than ours.

I’m on the Jeremy bus - the reason? I think our transfers can both teach our Freshman and ‘school’ a lot of the Freshmen phenoms that Duke is depending on to carry their team

I put my money where my mouth was. I know the best talent doesn’t always win it all, but Muss has done a lot with a lot less the last 2 years. Nobody will outwork him, or this team. A little luck won’t hurt either, lol.

I agree with this

Sometimes you have to make your own luck

What the heck is a blue blood in basketball anyway? Doesn’t matter what a team accomplished last year, 10 years ago, or over the last 50 years.

Every year is a new year and a new team with new opportunities for every school. That’s why the game is so great. There are no aristocrats, noblemen, or royals (blue bloods) in the game. Elite players and coaches can show up at any school any year.

I am not taking sides but let’s not act like only Arkansas has recruited transfers.

Duke has 3 transfers also. Difference between us and Duke is that Duke has a rookie coach and we have an elite proven coach,

Most scary team is UNC because they return their core runner up team and are mad that they gave the championship game away. But then they may put too much pressure on themselves.

Of the four teams, Kentucky has the best mix of freshmen McAAs, transfers and to returnees. That is why they are ranked higher. But there is a lot of pressure on Cal to overcome the down year and they may fold.

Going to be an exciting year.

Tired of hearing about Gonzaga. Zags never live up to the hype.

Calipari is a good coach. But he’s just that. A good coach. Cal’s been overhyped by sports media for literally 2 decades now.

Oh, I don’t know, reaching two NCGs and starting 31-0 in 2021 is pretty much living up to the hype. They just haven’t stood on that top step yet. I think they will eventually. Few is a helluva coach and he’s recruiting insanely well.

Speaking of the Zags, they’re pretty much the most likely top 10 program to play home and home against other high level teams. And sure enough, they’ve booked a home and home with the Squid. Kentucky goes to Spokane first. 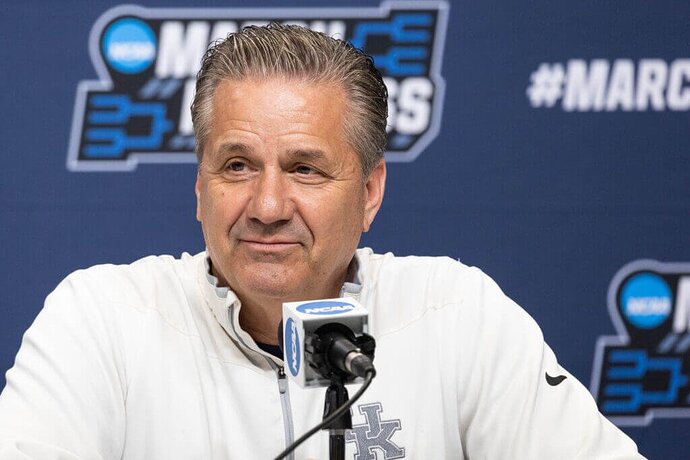 John Calipari teased a big announcement during Kentucky’s open practice and telethon Tuesday night to raise money for parts of the state devastated by recent flooding. He wasn’t kidding. One of his best coaching friends, Gonzaga’s Mark Few, called...

This also says Kentucky is working on resuming a previous home and home with UNC, but it’s not going to happen this season. (And no, Kentucky is not a top 10 program right now).

And UK’s Blue-White game will be played in eastern Kentucky which has been ravaged by flooding in the last week or so, probably in Pikeville,