As many here know, I’ve been a strong advocate of the non-pod, but 3 “permanent” conference opponents for each of the 16 teams when the Horns and Sooners join the SEC. I’ve projected that our 3 would be UT, OU and Mizzou. But there are other scenarios being discussed as well.

Here is a chart that someone made that proposes a different collection of teams for us to play each season. But beyond that, it’s a nifty format for showing how the longer term rotation would work for each team, assuming the annual rivalries they project. 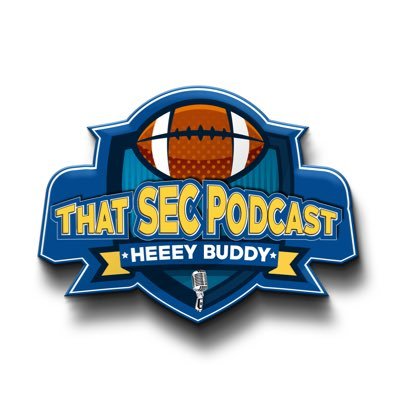 @thatSECpodcast
This is probably the best projected model for the SEC schedule we’ve seen after Texas and Oklahoma join the league. Anyone know who created this, we’d like to credit them https://t.co/82IkbNkJ4f 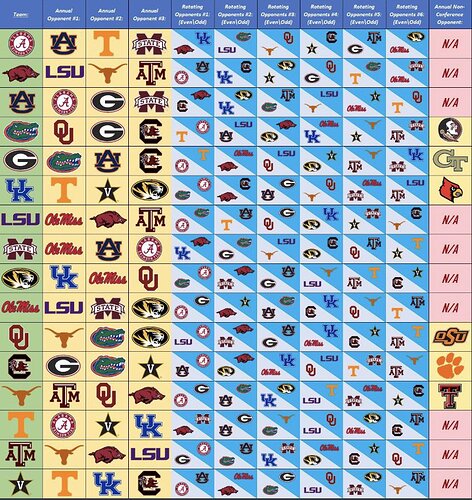 I think the Vols would say “where do I sign?” to that schedule. Alabama every year…but they do that already. The UT/UF rivalry was a really good one for a while…but my guess is that the prospect of not playing them and UGA every year is pretty attractive.

I may not feel this way several years down the road but I really want to play OU every year. I doubt I am in the majority but I would rather play them every year than LSU. Just feel like we have a better chance of consistently landing recruits from Oklahoma than Louisiana. The only “negative” to that is that our 3 constant opponents would all be recent SEC additions…and none of the “old guard” SEC.

Just my two cents. Thanks for sharing.

That would be interesting. Some thought went into that. Man, LSU, ATM, TX every year is dauting, but that is what it will be in the SEC. Pretty well what it is like already.

Man, LSU, ATM, TX every year is dauting, but that is what it will be in the SEC.

Let’s see. First of all, it’s a 9-game schedule, which seems inevitable.

Taking another look at it…it’s interesting to see what this schedule has to say about the two new kids on the SEC block…the Horns and Sooners.

Texas would maintain all 3 of their long-term rivalries by playing the Sooners, the Aggies and us each season. On the other hand, OU would play Texas, MIzzou and…Florida (???).

Seems like OU gets the easier route in that comparison.

Florida eventually gets back to being Florida, you would think (although Texas hasn’t gotten back to being Texas). Misery, well, that’s the old Big 8/12 thing. The Paperclips don’t have a long history with us or A&M or LSU.

I don’t like that set up. Of course, that’s just one guy’s speculation so it’s no big deal, but if geography means anything, we’d have MU as a permanent rival. But probably OU, too. Regardless, here are the teams who will almost always in the upper tier–Bama, LSU, UGA, UF, OU, TX, TAMU, AU. I don’t mind having 1 or even 2 from that group, but I sure don’t want 3. We ought to have at least one from this group: OM, MSU, UK, Vandy, MU, SC. At least we should if the league is going for some competitive balance. It should at least strive for that.

If you’re going to do a two-year rotation of the other 12 teams, you’re gonna have six of the other 12 every year, and that’s probably going to mean four of the “upper tier”, assuming at least one of them is among your permanent rivals.

I don’t mind playing upper tier teams. As long as we’re in the SEC that’s going to happen. But we won’t be treated differently from anyone else in that scenario. What I don’t want is to be stuck with 3 of the best teams as an annual opponent–and then be part of the rotation that also gets the normal share of hardest teams. I don’t want another 2020 where we got screwed in the scheduling. This guy’s pod is too top heavy. No one should have a top heavy pod except maybe one of the top schools. Alabama will have TN, Auburn & probably LSU when it’s all done. Tex will have OU. Auburn will have UGA & Bama. We ought to get Missouri. No reason not to. Geographically close. Both usually in the lower half of the league. Neither of us has a long history with anyone else in the SEC. If we get MU, I’d be fine with getting 2 of OU, TX, or TAM.

I don’t see Texas as an upper tier team. They haven’t been for a decade or more. And until they stop shooting themselves in both feet with their ego they will stay an also-ran

I agree with you, Chip, although I am sick of playing Mizzou every year. That’s just a boring game to me.

No doubt they’ve been down, but with their resources they’re not likely to stay down long–and I’d love to be wrong about that.

They can’t even win the Big 12, with really one good team and rotating others. They’re not going to be able to hang with Bama, Georgia, etc. Even with us. We’re a better program now

The biggest concern I’ve had with Texas joining the SEC is that becoming part of the best conference in the land may really galvanize their program.

Other than winning a national title with Vince Young, they haven’t been able to figure things out over the last 20 or 30 years. But that doesn’t guarantee that they won’t ever figure it out. They have incredible resources both in money, a huge fanbase, and a very fertile recruiting territory. The spark of joining the league could incentivize their efforts to come together. Their pride is on the line, and Texas pride, as we all know, is gargantuan.

I hope they continue to be a mess, but I’m not going to write in stone that it will always be the case.

The key word in that is “now.” A program with Texas’s resources won’t be down too long at a time. There are some programs that just won’t stay down forever. So Cal, LSU, Bama, Ohio St, Mich for example might have down periods but they won’t stay there. Texas is one of those.

Unbelievable resources and recruiting advantage added to much greater exposure will unleash that dormant orange beast, I hate it, but it seems highly likely.

I agree with you, Chip, although I am sick of playing Mizzou every year. That’s just a boring game to me.

I understand where you are coming from…it isn’t a match-up (at this point) that does much to get your blood pressure up (except for the embarrassment we’ve had losing to them, which I hope is corrected now).

On the other hand, with the SEC’s roster of possible opponents, I’d rather have a likely win on our schedule than a 3rd annual opponent that is more difficult to consistently beat. We need at least someone on our schedule like that, and Mizzou is the most likely candidate.

The biggest concern I’ve had with Texas joining the SEC is that becoming part of the best conference in the land may really galvanize their program.

Being in the SEC hasn’t galvanized Auburn, lol. It’s such a big culture issue for Texass . I don’t see if getting fixed. Ever.

A&M has blown pass them in recruiting and being the only team in Texas as an SEC team is likely a big part of the reason. I think the ugly orange team will fare much better in head-to-head battles against A&M for top Texas players.