New seating plan for baseball in 2022

Makes me nervous. I LOVE my current seats.

Here is more on the change. I anticipate having additional information tomorrow. 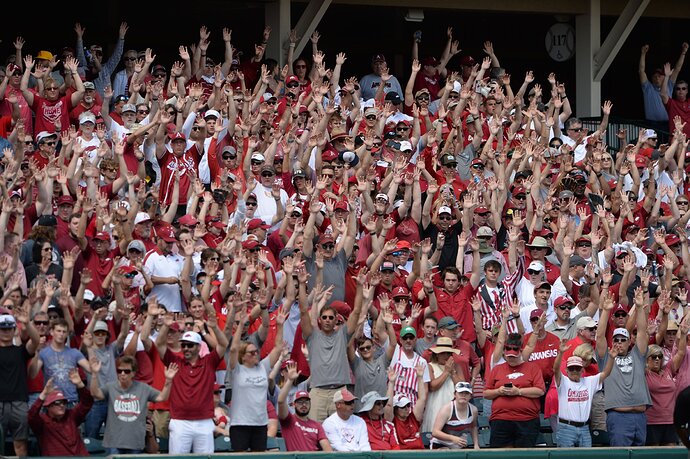 Seating priority at Baum-Walker Stadium will be overhauled prior to the 2022 Arkansas baseball season, according to a letter sent to season-ticket holders Thursday.

Me too! Since My wife and I are on fixed incomes! Over the past few years we have given up men’s basketball and football. It would break my heart to give up baseball. We have been season ticket holders since 96.

I have a feeling that I’m going to be really pissed off. And OBTW, I bet they are going to price out families.

I had heard rumblings for several months something like this was coming. The foundation knows it can make a lot of money off of the ideal seats at Baum due to the current demand.

It is going to be unfortunate for some people who supported the program for decades, including during the lean years. I think there will be people who are going to priced out between this and the recent ticket increases.

Arkansas baseball has long been an incredible value for your dollar, and that value built a diehard fan base of people who might consider themselves baseball fans above anything else. Even before this decision, it was becoming increasingly less of a value. The per-game cost of a season ticket is still going to be less, but the overall commitment will probably be comparable to buying basketball tickets.

Looks like it’s going to cost to sit behind home plate! 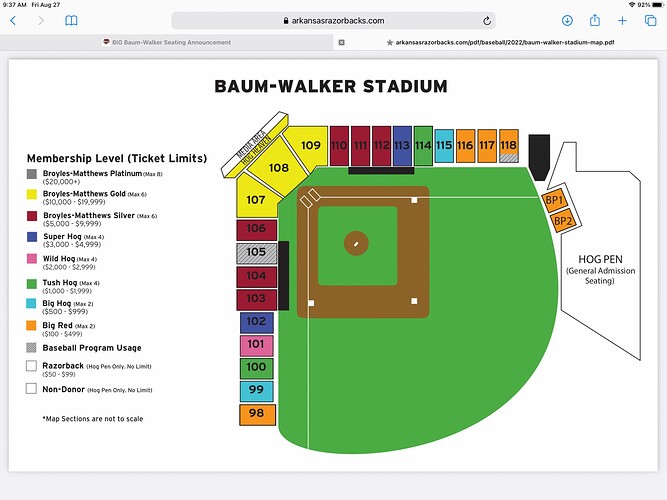 I got my email.

There are going to be some mad folks, and I’m talking about people who have supported UA Baseball for a long time.

You’re already donating to get your SIC seats, aren’t you, Marty? You should be good then.
Oops, I just saw that donation chart. I think you’re gonna be mad.

I may be completely wrong but the days of Baum being packed are over. I guess I will get a bigger TV Frank is rolling in his grave.

So you think people are going to buy season tickets and not go to the games?

You got that right! I have been a season ticket holder since 96 and this is the way I get treated. HY is nuts! I knew prices would go up but what I am seeing is beyond ridiculous. These are MLB prices!

Many will stay at home and watch on TV

To keep my seats, they are asking for a 60 percent increase.

Considering I drive from LR, TV might be the way to go.

I have always been confused as to donation level when you get tickets to multiple sports. (I have never had season tickets to more than one sport before this coming year). I gave $750, so I am a “Big Hog” as i understand it. Does that make me a “Big Hog” for football tickets, basketball tickets and baseball tickets or do I have to give $750 3 times? (Which probably isn’t going to happen).

You are now that level for all sports.

How many were not paying the donation level required for their seating in the old plan? I mean, there’s got to be a mid-point somewhere? I knew people that gave very little that had seats behind home plate, yet it was a BMS level. I think you’ll find that with only one donation required to cover all sports, they’ll sell the tickets.

I completely understand, but does lifetime giving and loyalty mean anything anymore?

I agree, there has to be a midpoint.

I’m incredibly sad for all of the families that have built the program and are now priced out of their tickets. I have so many thoughts and jumbled up feelings that I’m really having a hard time trying to express them.

I’m sure the anger will come, but right now I feel an incredible sense of loss. This will probably destroy the BaumBQ Squad.

Maybe there are enough Broyles Matthews donors who want baseball tickets to fill those prime seats. People like Marty are going to be pushed down to less desirable seats. And I’m sure some people will be pushed out entirely.

I think HY just blew up a lot of the goodwill he’s built up with the fans.

Greg, at one time you had to donate to specific sports to get tickets, i.e., a basketball donation needed for BWA, baseball for Baum. Fortunately that is no longer the case.