New Hog on back of "Pig Screen" illuminated after hours

OK . . . so it’s not exactly what I suggested to Jeff Long 5 1/2 years ago . . . but close enough. I’m very, VERY happy that they decided to go with the backlighting instead of the traditional lights behinds a translucent red Hog type thing. Looks pretty good!

My only minor “wish” is that they had made a couple of small holes for the eyes and tusks so that the lights could have come through there as well. But, I’ll take it. (Could also use some backlighting under the “Donald W. Reynolds Razorback Stadium” lettering so that those can be read as well). 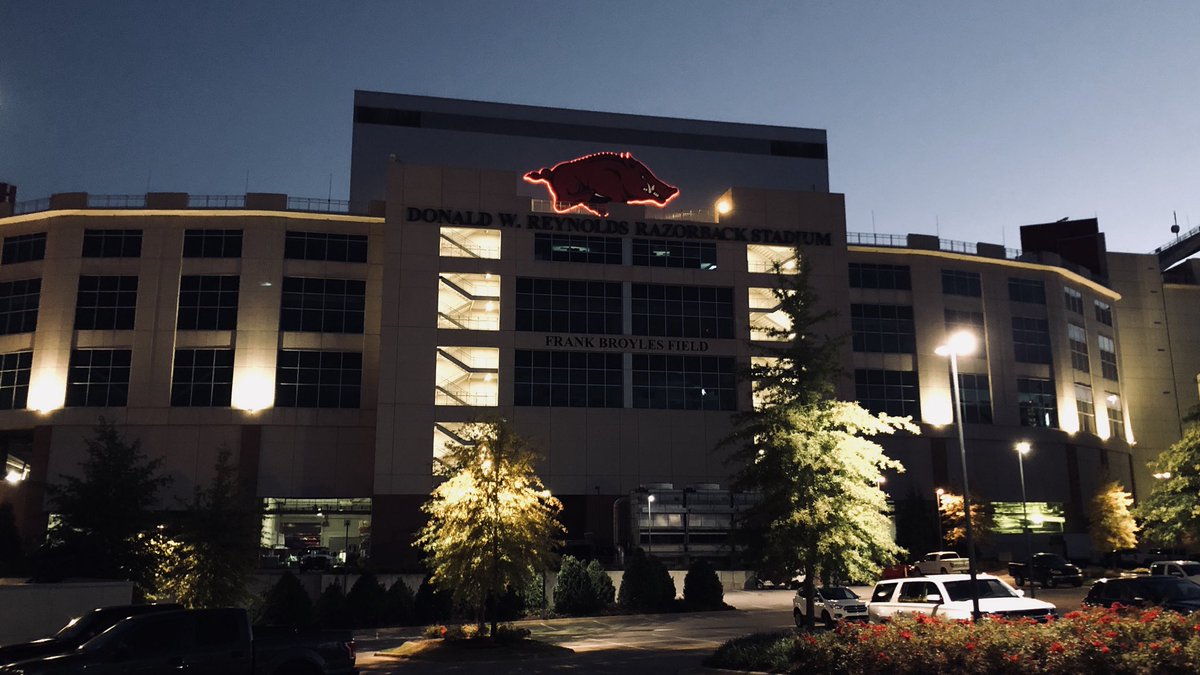 I love it! So glad they added the lighting to it. Really looking forward to seeing these new renovations in person. Now all we need to do is show some improvements this year, win some games, and hopefully keep adding to this great recruiting class. Saturday can’t come quick enough.

Best mascot in the country

I watched the video from the tour of the new NEZ last night and there’s quite a bit of backlighting utilized inside the NEZ structure as well, in the locker room and in spectator areas. So that seems to be sort of an architectural theme.

Looks really good. We have a great mascot. So unique.

I am assuming the one on the back of the video board at the north end is illuminated as well? I guess I can look at the cam tonight.

I am assuming the one on the back of the video board at the north end is illuminated as well? I guess I can look at the cam tonight.

Yes - in looking more closely at the building under the scoreboard, the pic I posted appears to be the SEZ (viewed from the Football Ops Building), and not the NEZ. Someone emailed me the picture and referenced it as the NEZ. As that area has changed so drastically in recent months and I’m not yet familiar with it (as I was the old Broyles complex), I didn’t notice it at first.

I looked at video from the past couple of nights from the stadium-cam and it doesn’t appear that the NEW Hog is illuminated yet. I assume that will come, since it’s SEZ “cousin” has that treatment.