Last five in includes Georgia, Bama and LSU. They put the rest of it behind a paywall but getting all three of those in would be slightly surprising.

Don’t like Okl St in there, always give us problems .

Every #2 seed is going to be pretty good & capable of winning. I understand about our history with Ok St, but none of those players are on this team. We’ve got to remember that history won’t affect any game next week.

We also won a regional in the Okie Lite ballpark once on the way to Omaha (2015), so that goes both ways.

I agree buts it’s never easy with them but #2 seeds are going to be very good no matter who I guess, but would rather have someone than them

Very true and it was at the oSu sucky ballpark, in every sense of that word.

I keep up with Oklahoma State and have watched some of their games this year. They have not played well against quality competition.

That’s good to know.Thanks…who are they like in the SEC?

I don’t know if it’s a great comp, but LSU was my first thought in response to your question. OSU has a couple of great hitters (Christian Encarnacion-Strand and Jake Thompson), but then a sharp drop off in the rest of the lineup.

The pitching has been inconsistent. There have been weekends when OSU pitched well (they held Texas Tech to 10 runs in three games), but then just implode at other times (Vandy and TCU scored 29 runs, and Oklahoma 28 runs in weekend series against them). OSU had a pitcher no-hit Kansas a few weeks ago.

If it’s okie st, have the officials check their bats first.

ORU was eliminated from its conference tournament by North Dakota State. That’s a bit of a surprise. ORU almost always wins that tournament. 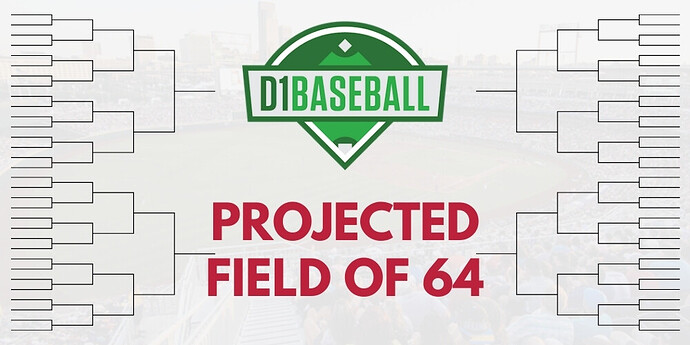 In D1Baseball's latest Field of 64 projections, we have a national seed change and one change in terms of the Top 16 host sites.