This was a good and informative article with lots of quotes from Patrick about taking the job at OK.

Worth a read. I feel OK about his move after reading this. I still wish he was here, but I understand better why he took the OK job. 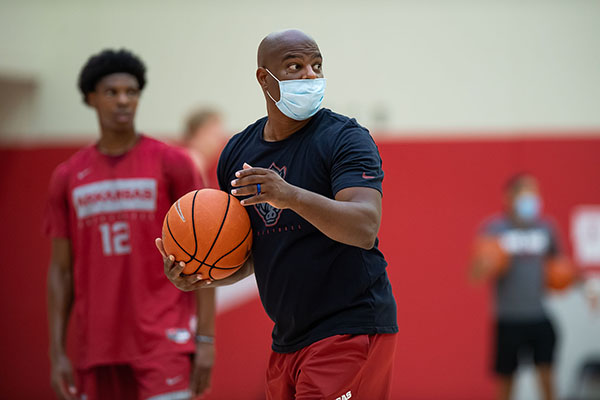 David Patrick said his decision to resign at Arkansas and take the same position at Oklahoma had nothing to do with any issues he had working for Eric Musselman.

I really did not learn a lot from reading the story. As far as what he said, not sure what else you would expect him to say.

Regardless, he moved on. Time for us to do the same. I’m not quite sure why Bob decided to write an article about a coach that we will play against next year, but I’m sure he has his reasons. It’s almost like Bob wanted to placate the “Muss is hard to work for” crowd. I personally want to know more about Patrick’s replacement. One thing I am certain of, Muss is gonna burn thru assistants, and it doesn’t bother me in the least as long as he continues to win. Go Hogs!

What I learned from the article is that while he and Muss have good friendship, it is probably a business friendship, whereas he seems to have a true personal friendship with Porter. So, when Porter asked, he could not turn him down.

But thing that got my attention was that he was getting offers from other schools like Illinois. It is not clear whether these offers came before Porter took Oklahoma job or after. But regardless the word must have been out that he was looking to leave.

So while it is understandable that he could not turn his friend Porter down, question is why was he looking to make a lateral move to schools other than Oklahoma after just one year here. I don’t think Bob’s article sheds any light on that.

I don’t have a clue as to whether Muss was too demanding, but I know this: the sure way to kill a career as a coach is to publicly say your boss is too demanding.

Muss runs his Arkansas hoops program like an NBA team. That means a high turnover rate for players and assistant coaches.

Better get used to it.

He has former assistants jumping at the chance to come back onto his staff, so that cancels any concerns I have that he might be hard to work for. Even if he is, that may not be a bad thing. Saban’s staff is turning over constantly and that has not seemed to slow him down. Muss is demanding of his players so why should the assistants be treated any differently? Good players AND good assistants don’t run from high expectations, they embrace them. JMVVHO

Bottom line if Muss keeps winning big (at least Sweet 16), this is all noise. But if he doesn’t, I guarantee this will become an issue with Hog fans. Just like keeping loyal assistance long term will be hailed as a sign of a stable program, if the coach is winning big, it is all about W-L.

As far as the former assistants wanting to rejoin the family, we know Gus Argenal came back. But is that true of the other 14 who have left? That is yet to be fully tested.

The last coach we had was thought to be too loyal to his staff and was criticized for it. Muss comes in and has a high staff turnover or at least some say that. Not me. He coaches with a lot of passion and may require more passionate assistants than the ones who left. Just a guess.