NC State is out 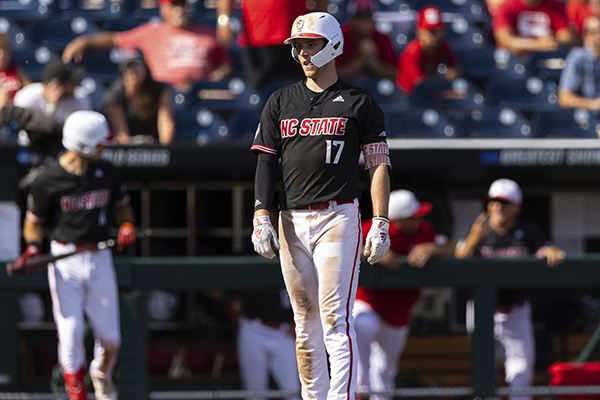 NC State out of College World Series due to covid-19

Vanderbilt will advance to the College World Series finals after North Carolina State was forced to drop out because of covid-19 protocols, the NCAA announced early Saturday.

What a way to back in. New life for the Conversationlist Corbin.

I still think Vandy would have won the next game to advance, but would have wasted some pitching to do it. Now they get a nice easy invite to the final, get to save their pitching and be completely rested. They will have that unfair rested advantage over whomever they face.

I wanted a Vandy v MSU matchup and still have that possibility, but damn if I wanted to see it happen like this. This stinks.

OMG! just a total bunch of Crap! never seen anything like it.Really feel bad for NCS who had a once in a lifetime opportunity taken from them,I despise Vandy Baseball!have never seen such luck,hope they get their !^%$## beat!

They should have never been allowed to play the day before with the virus circulating their team, more than half the players already testing positive, and their dumb @$$ Coach discouraging vaccines and refusing to talk about “politics”. Look it ain’t politics when you lose a once in a lifetime opportunity and put players and fans at risk. That’s baseball. That’s personal. That’s not politics. He should have answered the questions. He lead his team to that big baseball moment and then refused to face the music. Pathetic.

Where did you see that?

Idk who said it but he wouldn’t refute it when given the opportunity in press conference or that’s how espn wrote the story anyways that’s what I read, clearly a lot of kids didn’t get vaccinated. Now maybe he has some great sense of failure and disappointment for those kids and so is just trying to protect them in the media by takin their back even tho he is silently getting vaccinated when they got a culture against it in his program. His statements were pathetic anyways. I guess that’s to be expected with such a pathetic exit from the championship. Sad. Should have been the hogs. Not politics. This is baseball.

If the coach did that—i repeat, “if”—then he is an idiot who has no one but himself to blame.

It is not about politics. It is about health, personal responsibility, and being a good teammate. You would think if only for the sake of the team all of the players would have gotten vaccinated. And even if anyone disagrees with that, or even if there were special circumstances for a player or two, they are not saying what one player did, but it was so egregious he got kicked off the team by Avent. I feel sorry for NC State, and for the lost dreams of the players who did everything right, but health is more important than sports, and NC State’s other players apparently did this to themselves and worse, to their teammates.

I didn’t read the article… did they specifically say that these players had not been vaccinated or is that an assumption? The vaccine does not keep you from getting the virus. Hopefully these kids will do well with the virus and not have significant health issues.

First of all, I am obviously pro-vaccine based on my education and professional life. Having said that, these kids (and maybe coach) made a decision to not get vaccinated and now they are facing the consequences of that decision…something hopefully they will learn from as they go forward in life. I am seeing several patients every day that are dealing with consequences to this same decision to not get the vaccine, and it’s sad and tiresome for those of us on the frontlines ready to move on from this virus.

But I feel sorry for NCState kids bc they won’t get the chance to go further on the field.

Get vaccinated people. This virus isn’t going anywhere and will continue to make people sick until it runs out of people to infect bc they are immune!

Idk who said it but he wouldn’t refute it when given the opportunity in press conference or that’s how espn wrote the story anyways that’s what I read,

I haven’t read that anywhere. Can you provide the article? I’ll try to find interview because this is interesting to me.

But I feel sorry for NCState kids bc they won’t get the chance to go further on the field.

Maybe they understood the consequence on the front end and we’re willing to accept them. Right or wrong some people feel that way.

I’d bet to a man they regret not getting vaccinated. I’d also bet they thought this would never happen to them. But as I taught my kids…you decisions all have consequences. And life is not fair.

They haven’t said if they were vaccinated or if they got the virus. They say it is private info. U have to read between the lines to understand what’s going on and to understand that when the coach says he won’t talk about politics what he’s really saying is he is blaming what happened to his team on politics. It would be helpful to know the complete protocols for contact tracing, testing, and how the State department of health there in Omaha made the call to disqualify their entire team.

Also replying to specific question in this thread, No the coach wouldn’t say that he discourages vaccines, of course he would not say that at this point, maybe he learned the hard way or maybe he is just talking politics, but he was asked the question and he didn’t answer. Seems like poor leadership to not refute that kind of doubt people are asking you about and also not to make your guidance and your values on these matters very clear to your players as a leader. He did say explicitly he doesn’t try to push his own values on his team but they talk about things and kids make their decisions. He would not say if he discouraged the vaccine. Seems like he definitely didn’t encourage it. And it’s clear he is mad about politics. He just got caught out on the wrong side of things here and was acting like a baby about it. I would be mad if I were him too. Hopefully everyone recovers from their possible illnesses and definite disappointments even stronger and better than before.

Yea I don’t do that. That’s how a lot of assumptions and misinformation is spread.

It was the early version on ESPN website this morning. Probabaly still up there. I wish we could find a recording of the press conference to see what exactly was asked to get those responses in quotes and also what his full answers were. I’m sure they are still talking about this one and will be for a long time in Omaha and in Wolfpack country or whatever. I find it interesting too they were the hottest team in Omaha and only the third NCAA team in any sport To be disqualified from postseason due to protocols.

I agree totally. I wish they would just say what the protocols are for disqualifying a team and how many kids were infected and if they were vaccinated or not and the coach would say what the hell he is talking about when he says it’s politics and he’s not going to answer that. It’s baseball. Answer the questions you know? Why are you guys out of the championship?

So, it is Vandy versus. either MSU or Texas. I guess I will be a Bulldog fan today and until the final game is over.

Couple things stand out to me watching all the super regionals and the CWS games—Teams need min 3 strong starters and four is better, plus two strong guys out of the pen. Second, you have to be very good on defense as extra outs , including walks , always come back to bite you at this level of competition. Finally, batters have to make the pitchers throw strikes and not help them with poor pitches. It is hard to win when you get to this level but if you do anything can happen as well.

Games needs to speed up the replays and consulting between the umpires. They are not as good as they should be for this level of competition. I saw some Arkansas fans and fans of other SEC schools at the MSU-Texas game last night, that was telling as well.

Idk who said it