So, I recorded today’s Golden State summer league game, and JD doesn’t get a single minute. I just don’t get it. Seriously. WTH? Some of the guys that played, I have never heard of, and they were not impressive. JD was an All-SEC player. Again, I just don’t get it, and it pisses me off for JD!

Was JD on the bench? I turned it off when I found out Moses wasn’t playing. Maybe today they both play.

I looked up the box score. GSW played 11 guys; nine got DNP-CD, including JD and MM. You can’t really play 20 guys in a game; they’re gonna have to have some kind of rotation. Four of the guys who didn’t play yesterday, including MM and Kuminga, are gonna get a ring this fall.

They play the Lakers at 6:30 tonight. I bet the nine guys that didn’t play yesterday will get plenty of run today, including JD and MM. 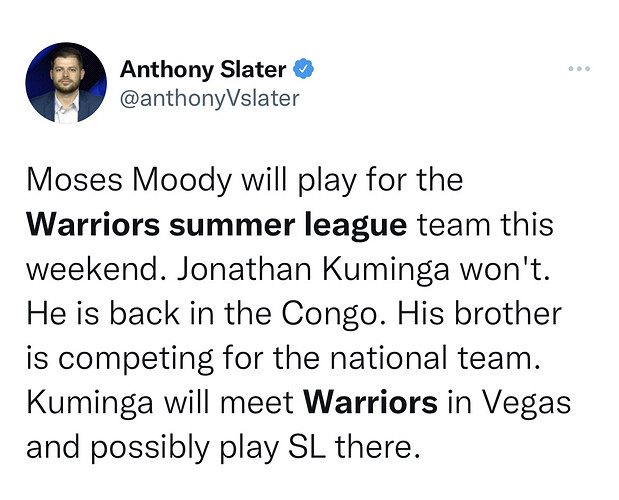 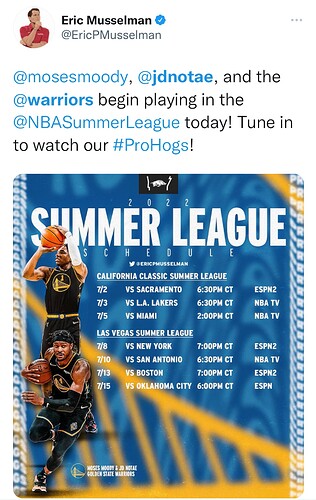 I don’t think JD was on the bench yesterday.

JD was on the bench in street clothes.

J. D. is playing in the 2nd game right now. He is #41. Moses got cut near the eye and had to leave the game briefly. Moses is back in. Great to see both on the floor!

The announcers just said that Moses had to get 2 stitches. He is back in the game.

3 Hogs on the floor tonite. Mason Jones is #17 for the Lakers.

And one Fedvul High grad, Payton Willis for the Dubs.

Hope this is the last year Moses has to play the Summer League.

Isaiah Joe is playing summer league again this year. This will be his third Summer League. That is not good.

It’s a shame when Payton Willis and Scottie Jr look better than JD, but that is what happened tonite.

Isaiah made a big mistake

You can’t say that. If he’d come back, he might still be an NBA fringe player at this point, and he’d have one less year’s salary in his account (year 2 was about $1.5 million). I don’t know how long he can keep bumping along at 11 minutes per game, not even playing in 1 out of 3 games, 3 ppg production, though. Haven’t watched the Sixers enough to know why he’s not getting minutes, but something isn’t there. Eventually if he doesn’t correct that, they’ll find somebody else.

He probably needs a change of scenery. Too many 3 and D players ahead of him with the Sixers.

He needs to get away from Doc Rivers ASAP. Dude gets married to players and never wants to give young guys a shot with Maxey being the exception. If the Sixers would have had a veteran so so point guard Maxey would still be a back up.

Joe could out play Danny Green easy this year but Doc was married to him. Green couldn’t dribble, shoot or defend this past season. All the while Joe sat at the end of the bench.

He needs to get away from Doc Rivers ASAP. Dude gets married to players and never wants to give young guys a shot with Maxey being the exception. If the Sixers would have had a veteran so so point guard Maxey would still be a back up.

I find most NBA coaches are like that. It is hard to break thru unless you are a top draft pick. Take Steve Kerr at Golden State. He is married to Damien Lee and only gave Kuminga an opportunity to crack the regular rotation.

Kuminga was drafted ahead of Moody and that is why Moody did not get.the same opportunity.