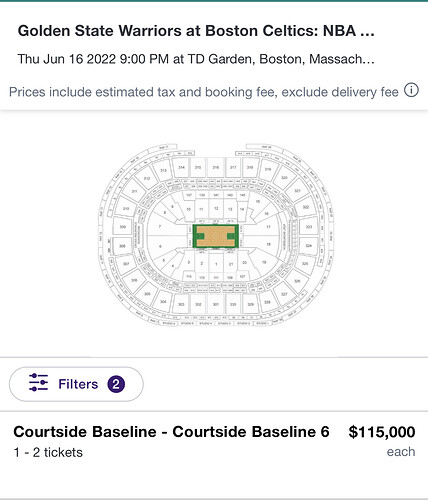 And the Celtics can’t even win the title Thursday. Of course, maybe that’s aimed at Warriors fans who want to be there and have money to burn.

I guess Muss could afford them. He’s a warriors fan.

Well, let’s see. Muss is making $4 million in base salary. $115K would be about 3 percent of that. Even at that income level, $115K is pretty pricey for one event lasting less than 3 hours. And if he takes Danyelle, that’s $230K.

That’s when you know you either …got too much money… or you’re just flat out crazy to spend that much on a basketball game. I wouldn’t do it even if I had that kind of money.

Well, I thought about buying a couple, but the fact that I would have to pay extra for the “delivery fee” just turned me off!

I wonder what the service fees were on the tickets? I had two tickets to the Eagles in the new Moody Center where UT will play a couple of weeks ago. They were floor tickets at $650 each face value and $100 of “Service Fees” for EACH one! Glad they were free because I would never pay that much. I didn’t buy tickets to another show that were $65 each because they had $25.50 in “Service Fees” for each one.