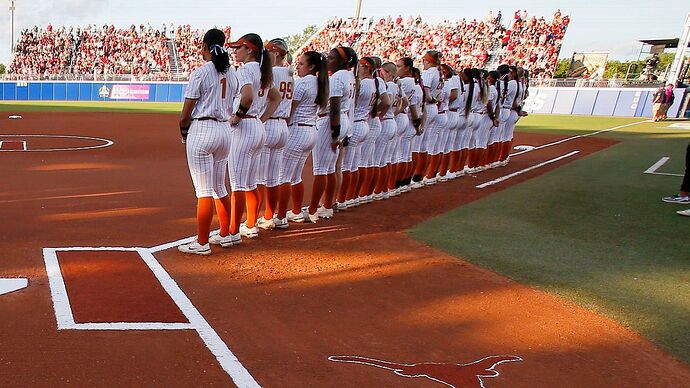 They should have let him sing & just told him he couldn’t do that. Tell him we all know how sensitive Texas is & we don’t want to hurt their lil’ feelings.

We have become an overly sensitive society and it continues to get worse.

Joking is not allowed any more.

Pretty petty but that’s the world we live in now. What’s next, a player flips a bat and a home run is taken away.

But giving the finger to the other while running bases is allowed without punishment. Hypocritical IMO. Highly offensive to most.

Those performing the national anthem should never appear to support one team over another while on the field of play.

It’s simply not a good look.

I have thought for years that there is no reason to play or sing the National Athem for things like a baseball or football game. The Anthem should mean more.than something played thousands of times a month.

I agree with that. I don’t have a problem with the downward horns sign, but the person who sings the national anthem at a neutral field shouldn’t be doing it.

However, I also agree with LDhog. This seems a bit of an overreaction when a player can flip off the other team while rounding the bases during a home run. There’s a fine line between over-policing and letting anything go. There have to be some boundaries. It’s one thing to tell an ump he missed a call. It’s another to tell him “F*** you.”

The fine line is that Texas complained about the horns down and not the double bird. I guarantee this is all Texas.

The umps had to see the “bird” which should be ejection. And if they didn’t TN or the NCAA should step in for at least 1 game suspension. Great example for kids……my goodness.

I have thought for years that there is no reason to play or sing the National Athem for things like a baseball or football game.

Agreed. The only time the national anthem should be associated with a sporting event is when a US athlete is standing on an olympic gold medal stand.

I dunno. I tear up every time The Anthem is done well, I stand with my hand over my heart…even when it’s not done well, and I’m a sucker for a flyover.

The only time the national anthem should be associated with a sporting event is when a US athlete is standing on an olympic gold medal stand.

National team competition is fine. When USMNT plays in the Nations League soccer tournament tonight against El Salvador, for instance, the anthem should (and will) be played. But the current situation is overkill. When teams turn the SSB into a cheer, (i.e., Catholic High students screaming ROCKETS at that point in the lyrics), it’s gone too far.

And I agree this has all the earmarks of Texass whining,

While I agree with the guy in spirit, I think that’s the correct call in this situation.

Horns down at every opportunity….
Except this one.
Shouldn’t have done it when he’s part of the official program

The guy did it at the WCWS to get attention. Mission accomplished. It was rude and inappropriate for his purpose at the game. Got what he deserved. I loathe Texas, but that was the right call to can him.

Mr Collier’s reply
“I Regret Nothing”

Just think those whiney crybaby “ShortHorns” - (oops sorry I may get this whole board shut down for that terminology). Will be trying to control the SEC soon.,
Again so sorry dear Texas.

as seen on campus in the 1960s and during the 1970s when i was there…excuse my french…Tuck Fexas!no orange sucks more than the big orange of…(fill in the blank)