My thoughts from the Missouri series 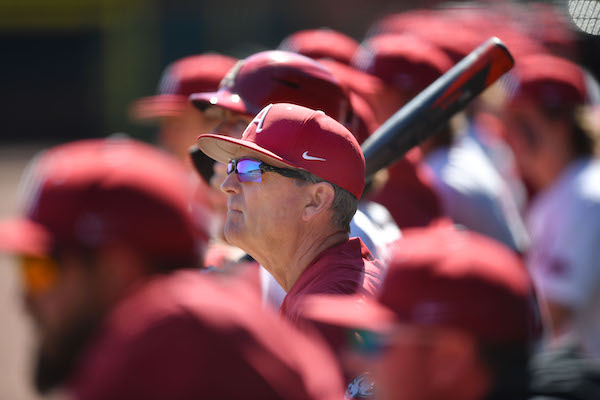 The primary objective remains the same on a college baseball weekend.

Very fortunate to not play anywhere near our best and come out winning the series. Hopefully we start swinging the bats against Little Rock and get some momentum heading into the weekend.

Good job Matt. For sure a series win is a good thing. I cannot help but be concerned about giving the sweep away on Sat. Good teams do not have pass balls and walks in numbers going into later innings especially with a lead. I never even had Little League teams do that. Perhaps they would have one or at most two, but what 3-4 pass balls (which were not close), and walks, after your team gets a lead? That is very concerning.

When your team gets a lead, the last thing your pitcher should do is give up a walk. Grove it if you have to. Normally, your defends at least have a chance. All they can do with a walk is watch. If these guys want to pitch for DVH, they better learn to get it over the plate or to not throw those 58 foot pitches way outside. They may have to walk home the next time.

Some of the Hog pitchers remind me of an old flame thrower by the name of Ryan Duran of the Yankees. Hitters were scared to death of him. He was wild and had really bad eye site. So far the Hog pitchers have to be one of the top teams in Hit Batsman.

I said in another thread that who are we gonna count on to come in and pitch in the late innings to preserve a close lead. I’m not sure who that is yet.
The teams in the SEC are tough. Not all at the same level, but tough. You have to come ready to play and focused. Vandy swept Mo and then turns around and loses a series to S Carolina.
Against Mo. we had two starters that couldn’t get past 5 innings! Bullpen wasn’t great. Tygart showed some real possibility of becoming the closer.
We played just good enough to win the series. Mo played bad enough, (defensively), to assist in our wins.

So far the Hog pitchers have to be one of the top teams in Hit Batsman.

They lead the SEC; not sure where it ranks nationally. I talked to Matt Hobbs about it last week. I asked him if it could be due to the cold weather they have played in, which can cause problems with grip. He said that has probably played a role, but it has mostly been an issue with some pitchers having bad command. And it might just be bad command one day. Connor Noland, for instance, hit three in one outing, but has only hit two in his other five starts. There is also a philosophy that the pitchers are going to pitch inside to hitters. That is going to lead to some HBPs.

I think you see more HBPs early in the season because there are more pitchers throwing due to the fact there are five games in a week and because the bullpen is still sorting itself out. The bullpen always shrinks as the season progresses and the coaches learn which pitchers they can trust.

I said in another thread that who are we gonna count on to come in and pitch in the late innings to preserve a close lead. I’m not sure who that is yet.

Right now it’s Evan Taylor and Brady Tygart. I think the coaches were also kicking themselves a little bit for not bringing in Mark Adamiak during the seventh inning Saturday.

The verdict is out on Zebulon Vermillion. He looked great against Kentucky, but struggled at Mizzou. I thought Gabe Starks’ performance Saturday was an encouraging sign. That’s two straight good outings for him.

Pooch - Ryan Duran was also known to take nips before and during his games pitching. Don’t know if that helped accuracy or made it worse.

Some of the Hog pitchers remind me of an old flame thrower by the name of Ryan Duran of the Yankees. Hitters were scared to death of him. He was wild and had really bad eye site. So far the Hog pitchers have to be one of the top teams in Hit Batsman.

Who is the pitcher that has been out hurt for a few weeks? He seemed to do a good job.
I think DVH will figure out who he can trust in the next few weeks. I also think this cold weather sure don’t help anyone struggling on the mound or at the plate! Warm weather sure is better baseball weather!

Matt, I may have missed it and if I did I apologize . Curious , what the Columbia home attendance would have averaged per game for this series given weather ,e tc.

I don’t think it would have been much better. Mizzou averaged an attendance of 1,101 during its last full year without capacity restrictions. The support just is not there for baseball.

Did he play college ball at Texas?

Thanks, I have not been to a baseball game in Columbia and did not have any idea really. Not surprised given weather and how sports are at Mizzou in general but St Louis has a solid baseball program and high schools have very good attendance . Has to be hard for Hawgs to play in that weather and with reduced support compared to Walker.

Good teams do not have pass balls

Turner doesn’t look like a big league catcher to me, but he sure looks like a very good hitter with big league potential. So, I’m thinking he should DH, play 1B or outfield. Makes me wonder, why not?

Coach DVH must not see this.

Turner is the best defensive catcher on the team.

It just hard to block on the plastic. Especially when your use to natural surface. We are all spoiled by watching Optiz for 3 years.

This…Opitz spoiled us and that synthetic turf is hard to block on, especially when pitchers don’t even get it across the plate in the air! Saturday, I think the turf robbed our 9 hole hitter of a good bunt basehit. It bounced straight up in the air to the catcher or pitcher…was a weird bounce. As I said, that MZ stadium is weird and high school-ish.